Studio i29 designed the stunning interiors of th Historical Felix Meritis building in Amsterdam, Netherlands. Every space in the building is unique and refers to a specific period in the building’s history. The aim was to show diversity and to give all spaces their own identity. Take a look at the complete story after the jump.

From the architects: This unique building on Keizersgracht was built in 1788 for a society of scientists, artists, entrepreneurs and thinkers. It was a hotspot for creativity and cross-overs during intellectual movement “The Enlightenment”. Five different departments were housed in one building; Music, Commerce, Literature, Physics and Drawing.

Award-winning studio i29 made the interior design of Felix Meritis anno 2020 commissioned by investment group Amerborgh. A distinct and charismatic design, inspired by the rich history of the building. Every space within the building refers to a specific period in the building’s history. The starting point was to show diversity and to give all rooms their own identity, just as in 1788 each department was given its own interpretation. Together they form a collection of colorful characters in the house of enlightenment. The building has been completely renovated in collaboration with a large team of specialists and advisers; new installations and acoustic facilities have been carefully inserted within the monumental shell. Math architects was responsible for the architectural part and structural renovation. The plan is based on the restoration of the original building contour, whereby the necessary installations are completely hidden by a new lifted roof. In contrast to the existing classical environment, new interventions and finishes by i29 in the interior are clearly recognizable as such, bringing the building to the present again.

Felix Meritis has known many famous inhabitants, such as the political CPN headquarters and the Shaffy theatre.It’s still counted as one of the most important listed monuments in Amsterdam. The new Felix Meritis experiments with programs for a curious audience. Drawing on the domains of technology, entrepreneurship, science and art, with which the future is explored with a curious eye. Amerpodia programs four ‘cultural houses’ in Amsterdam, including the Rode Hoed, the Compagnie theater, De Nieuwe Liefde and now also Felix Meritis. Together they make a substantial contribution to social and cultural life in Amsterdam.

The entrance area includes a restaurant and reception which are modern interpretations of style rooms from the 18th century. i29 applied original colors and wall coverings, yet produced with contemporary techniques. For the restaurant, an image of a typical Dutch sky has been translated into a tactile wall covering. In the reception area, an old etching from the original Teekenzaal shows on the textile walls. i29 collaborated with Buro Belen for custom design textiles which match material and colors within the design. A light installation connects the two rooms to create a grand entrance as a modern “chandelier” from the ceiling. LED signage is incorporated behind a large mirror wall for information on the program. The same mirror information screens with interactive LED signing have been placed throughout the building.

The Concert Hall, famousf or acoustic concerts, is finished in original color schemes which regained a classical appearance. Large steel chandeliers and acoustic wall cabinets places the interior in the present at the same time. Flexible wall units can be opened or closed for sound absorption or reflection, and now make both acoustic and electronic music possible. They also provide in technical, light and sound facilities. Both a classical concert and a house party are now possible, as the building must ultimately be a vibrant culture house for both the young and the old.

The Zuilenzaal has its own unique character within the building; i29 proposed to preserve the raw character as much as possible. The room is, however, almost invisible, completely prepared for the future with the integration of all necessary technology, lighting and installations, but the history is still overwhelmingly present. In the Shaffyzaal all colors and materials refer to the illustrious sixties and Dutch artist Ramses Shaffy, when the room served as a meeting place for the Dutch avant-garde. A modern interpretation is the use of Intense and high-contrast colors on acoustic walls. Along with matching pieces of custom design furniture and a bar area cladded with rough steel sheets.

The interior of the Teekenzaal refers to the former atelier which was located here, with large “sheets of paper”hanging from the ceiling for acoustics and a graphic floor pattern. The Huslylounge, aformer office space at the time of the political party CPN, has undergone a complete metamorphosis and has been transformed into a colorful “garden room” executed in fresh colors and flooded with natural light by a large new skylight. This space will function as a lounge during larger events, but – like all other halls – it can be used fully flexibly for the rental of parties, conferences, debates, television recordings, theater and dance performances, meetings and more.

The Koepelzaal- and attic have been restored to their former glory, with it’s original wooden beam construction. New additions have been kept as simple as possible to emphasize the existing quality of the space. The general corridors and connection spaces are finished in neutral white and gray tones as a connecting element with the iconic staircase in the center. The enormous diversity in programming requires a layout in which all rooms can be converted fully flexibly and quickly. In particular, finding a suitable stackable chair was very important because it is used in all halls. i29 ultimately designed a chair especially for Felix Meritis that meets all requirements; stackable, comfortable, light, and in terms of appearance matching the monumental environment of Felix Meritis anno 2020. Chair “Felix” was developed in collaboration with Lensvelt.

The biggest challenge was to bring this old monumental building to the “now”, not only in terms of technology, installations and acoustic facilities, but also in appearance and experience. In line with the original philosophy of the Felix Meritis society, the new interior is progressive but made with respect for it’s history. A new chapter of the cultural house for the curious mind. 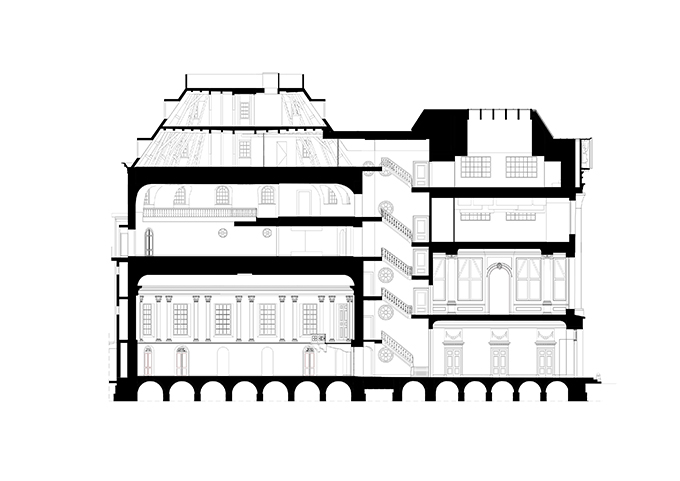 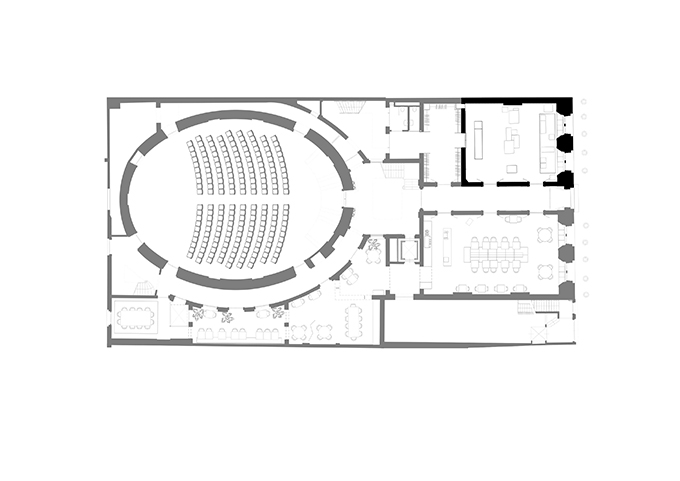 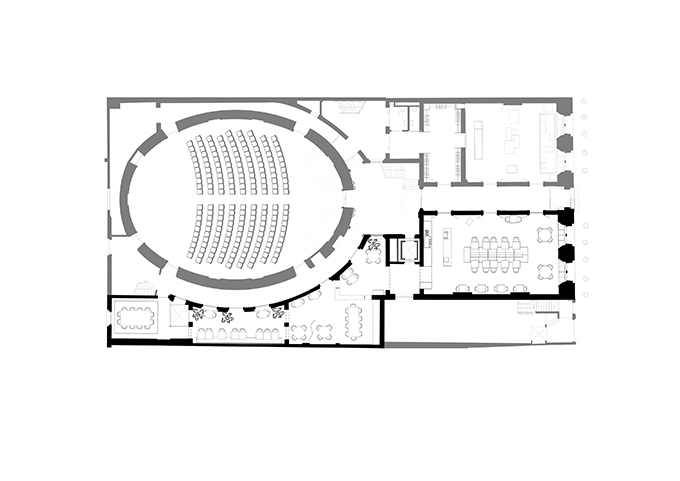 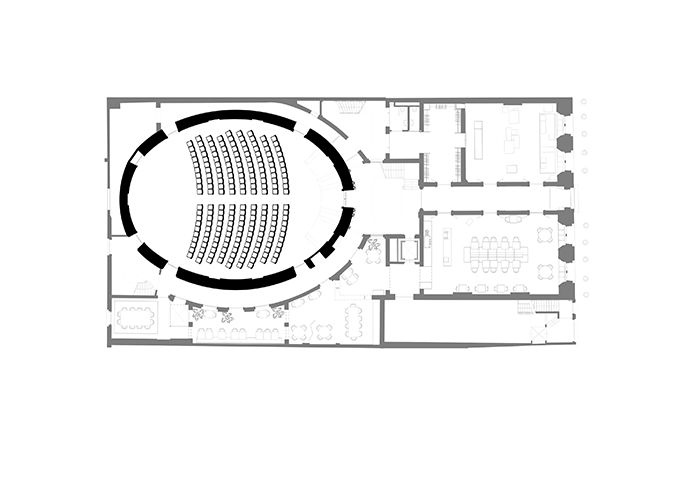 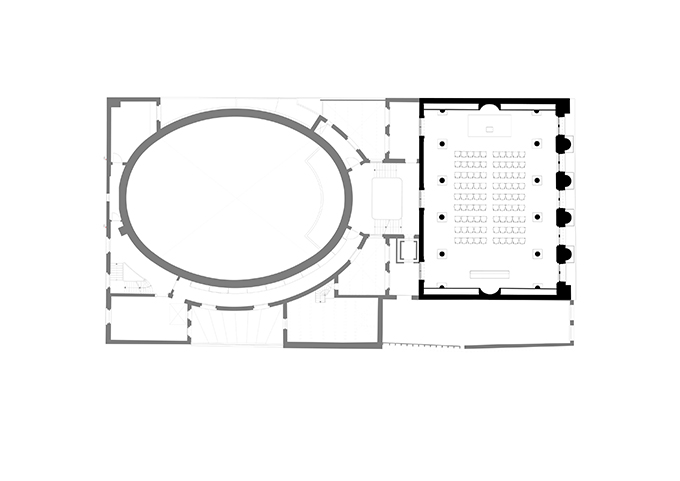 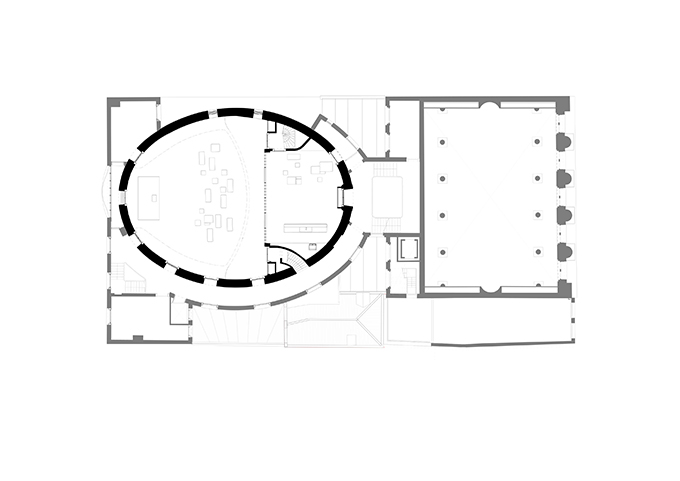 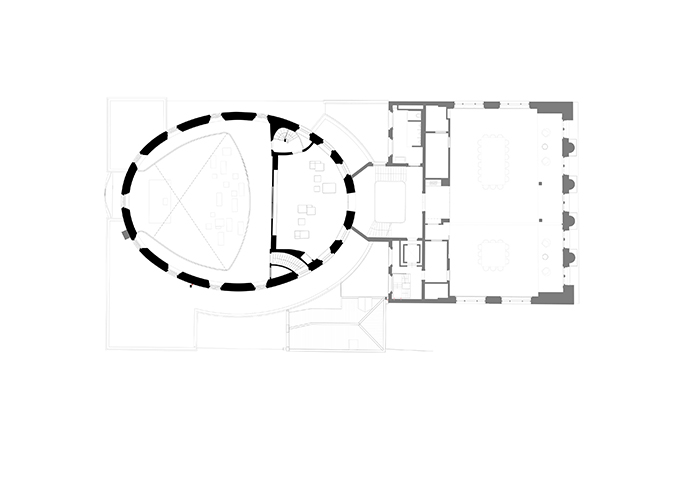 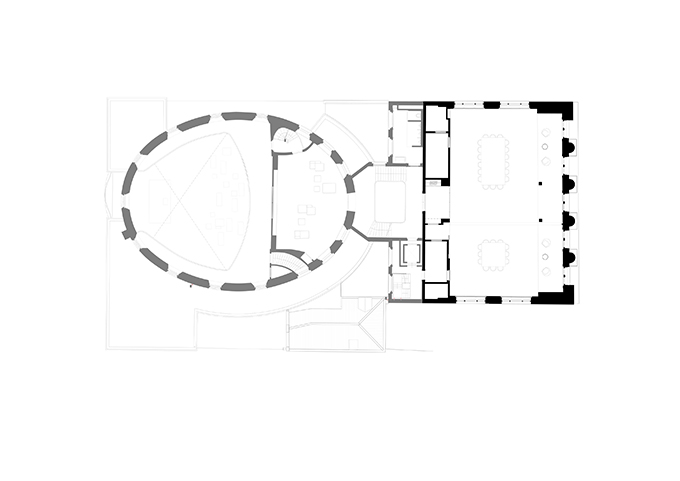 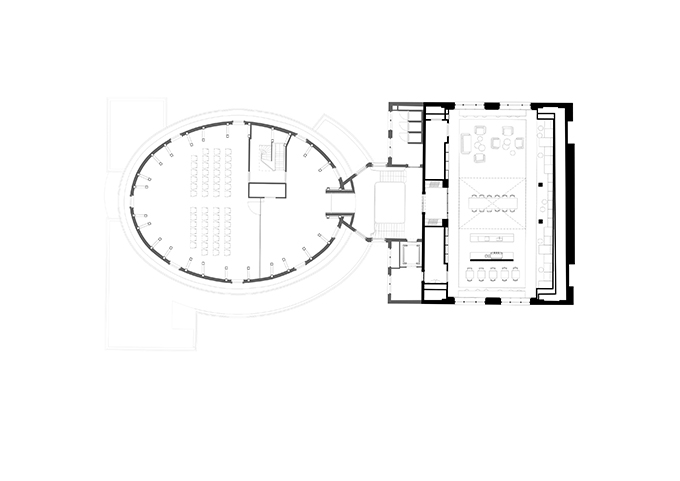 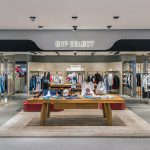 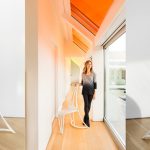