A New Urban Model. A century after the Republic of Turkey was proclaimed, the Canal Istanbul project offers to re-visit the map of the city. This project presents an improved urban planning opportunity for economical growth, and a historical turning point. One billion cubic meter of soil will be carved out in order to create the canal. iNANLAR proposes to utilize the soil and use this opportunity to build a new land and a new model for a forward-thinking living environment.

Over the past century, our world has witnessed tremendous changes, urban migration, global density, continuing growth of the urban fabrics, economical globalization, human’s mobility, and environmental concerns among many other issues.

A green island made of 6 hills of different sizes circling the downtown center of the land. Each hill up rises on top of a mega structural sphere that supports the residences on the hillsides and a community life at the center.
Each hill is designed as a mega-dome structure based on engineering and structural principals studied and implemented in architecture since ancient times and further developed as a geodesic dome in the last century by Buckminster Fuller. The design proposed for most of the island relies on compression and tensional integrity; it maximizes the material utilized to build the structure and infra-structure of the Island. The urban planning optimizes the slopes of the hills and their panoramic view on each side for greater residential areas.

Traditionally, communities have built their residential areas around the center of the town where political decisions or trade was made, and spiritual and religious temples were built – the community would grow around those centers with extended skirts of residence buildings and neighborhoods. The center valley of the Island offers ideal space and planning for parks and recreation centers. The buildings are covered with green living-roof and fade in the natural-type of environment in an organic way, while contributing to the constant energy recycling of the Island. Havvada adds a new dimensionality to the urban grid and offers an improved design that maintains and integrates the traditional organization of the urban design.
Conventional building construction requires major subterranean structures. This has long raised environmental concerns. Havvada design presents an opportunity to implement a new building organization.
The buildings are horizontal – circling the hills at different levels. They are all connected to one another and grounded at the peripheral base of the hill.
Buildings structure and Island infrastructure: INTEGRATED Consistency of Principles in Geometry and Physic at Any Scale
The entire design concept revolves around two geometrical forms and their structural principles: the circle and the triangle. The two geometries present unique structural advantages that were studied since ancient Greece to the Renaissance time and today. These geometrical principles are implemented and optimized in the design of HavvAda – from the master grid, the urban planning and the transportation grid to the structural support systems of the buildings.
The hills result from the structural net covering the domes. The residential buildings are connected to one another through this structural net.
Each building is built using the QuaDror geometry. QuaDror is a structural support system and a design innovation that our studio has developed and unveiled a year ago. It implements the forces and the efficiency of the triangle geometry in its 4 lateral sides. These allow for very strong and light building with glass walls and maximum light. The geodesic domes and the structural mesh upon them combine tension and compression for maximum structural efficiency. The domes are mega-structures ranging from 230 meters to 400 meters. These mega-mesh structures are very strong and light-weighted volumes. They are grids that contribute to the infrastructure of the Island.
Each dome’s structure is an integrated system that recycles and redistributes the energy through out the hill. This green-operation allows for more energy to be produced than consumed to be produced. The diameter of the Island is 3 km long with a 1 km diameter downtown valley in the center. Each hill presents its own eco-system with a fully integrated energy renewal operation. The hill slopes are living roof structures connected to one another and to the valley at the center of the island. The green hill slopes provide significant gains in heating and cooling efficiency and for water waste recycling management. The steep slopes of the hill also act as a natural ventilation system. The buildings on every hill-side are covered with solar energy recycling systems. Both the wind and the rain water are recycled and utilized for the operation of the community life. We aim for the 6 micro-environments to set the ground for a community that produces more energy than it consumes. The agricultural opportunity may take advantage of the different micro-climates at different heights/levels of the hills slopes to create a variety of vegetation and culture. Each eco-system aims to become a fully self-sufficient micro-environment that can also interact and complement one another.

This design proposal presents the ground for a forward-thinking living environment and a model of social co-habitation. The goal is to contemplate an improved way of living that is fully integrated within our direct environment.
The task for HavvAda proposal is to become an act for the creation of a net-positive urban model that generates more energy than it consumes and sets the prosperous ground for its community. The transportation grid of the island is drawn upon the particularity of its master-planning and the equi-distance between the center of the island and the center of each hill. A personal rapid transportation system as well as cable cars and walkways allow direct access from one hill to the other or to the downtown center.
HavvAda design proposes a community life organization that is inspired by the studies of the models of energy repartition in human bodies – the planning of the Island presents different areas of focus for each hill. These activity centers shall be housed in the heart of the geodesic dome of each hill- easy to access with the cable cars and through the rapid transportation grid. These centers include the Education District, the Entertainment Hill, the Health and Sport areas as well as the Business District.

The left and right side of the brain link creativity and Education next to one another. The Business area of the Island is west – on the way to the Wellness side of the Island where the Physical and Health Districts are facing the shore of Turkey. Across from the Business District, the Entertainment Hill faces east next to the Education District and the Arts and Creativity Hill on the north shoreline of the Island. 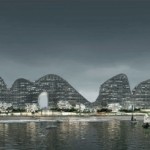