SRG Partnership recently completed their latest project:  the NYC Garage at Nike World Headquarters in Beaverton, Oregon. The project successfully merges safety, efficiency, and the functionality of 1,994 parking spaces for employees and visitors with the strength and spirit of competition and athleticism. Themes of movement and bold ideas are expressed through the garage’s massing, and it is artfully themed around the fast pace and “gritty urban” vibe of New York City. Discover more after the jump.

From the architects: The NYC Garage successfully merges safety, efficiency, and the functionality of 1,994 parking spaces for employees and visitors with the strength and spirit of competition and athleticism. As a dynamic facility complementing the character of the campus fabric, the garage redefines how people think about parking structures.

Themes of movement and bold ideas are expressed through the garage’s massing. The 840,000-square-foot structure is split into four 60-foot parking bays, with each bay expressed separately from the next and resulting in an undulating roof and end walls. The massing breaks, highlighted with bright orange metal panels, make the structure appear to be springing forward—emphasizing athletic movement and bringing the facility to a human scale. Part of the central bay is carved out to allow daylight penetration and to create a covered outdoor courtyard for sports activities, community gatherings and special events on campus.

The NYC Garage is artfully themed around the fast pace and “gritty urban” vibe of New York City. Each of the garage’s six levels is branded with super graphics, logos and colors for New York sports teams, all championship winners: the New York Giants, Jets, Knicks, Nets, Yankees, and Mets. Integrated as a signature space that defines and differentiates the traditional parking structure, the courtyard exudes an urban feel with asphalt paving, cobblestone elements and artist-commissioned graffiti walls, while equipment for basketball, wallball, and futsal infuses the distinct energy of New York City recreation.

The garage’s choice of materials and wayfinding techniques also contribute to themes of movement and athleticism. The cladding is simple, corrugated metal panel with a custom perforation featuring Morse code for the company’s trademark slogan; the code runs diagonally across each façade in four colors in four different positions on a custom aluminum extrusion. The metal panel siding hides cars from view, and the custom perforation and undulating geometry add movement to the façade while allowing dappled light to penetrate the interior. Linear skylights provide an abundance of additional daylighting and brighten the garage. 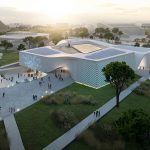 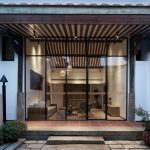