The buildings, which include residential, “oi cetel” and retail elements, consist of slender, sharply angled minitowers cantilevered around a central core. The design aesthetic is highly contemporary yet informed by aspects of traditional Korean culture.

The mini-towers feature a dramatic series of diagonal massing cuts that create living spaces that ﬂ oat beyond the structure. This recalls the eaves of traditional Korean pagodas—a design theme echoed both in the geometry of the building skin and the jutting canopies at the towers’ base. The theme is extended in the building skin, which suggests the scales of ﬁ sh and Korean mythical creatures such as dragons, which seem to dance around the core—hence the project’s name. (Yongsan, the name of the overall development, means “Dragon Hill” in Korean.)

Dancing Dragons’ scale-like skin is also a performative element. Gaps between its overlapping panels feature operable 600 mm vents through which air can circulate, making the skin “breathable” like that of certain animals.

Towers 1 and 2—about 450 m and 390 m tall, respectively—share an architectural language and, therefore, a close family resemblance, but are not identical. In the taller structure, the 88-level Tower 1, the massing cuts at the top and bottom of the mini-towers are V-shaped. In the 77-level Tower 2, the cuts move diagonally in a single unbroken line; they are also arranged in a radial pattern around the core that is perceptible as viewers move around the tower.

In both buildings, the mini-tower cuts are clad in glass at the top and bottom, making for dramatic skylights above the units at the highest levels and a transparent ﬂ oor beneath the units at the lowest levels. This of ers the opportunity for special high-value penthouse duplex units with spectacular 360-degree views of downtown Seoul and the adjacent Han River, along with an abundance of natural light.

The design of the 23,000 sm site—part of the larger Yongsan master plan —reinforces the angular geometry of the building massing and skin. Landscape features include sloped berms that echo that geometry. The site also includes a retail podium with a crystalline sculptural form and sunken garden that provide access to a large below-grade retail complex. 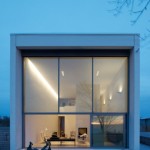 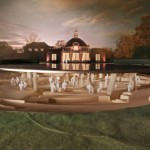