Adrian Smith + Gordon Gill Architecture is pleased to announce that it has won an international competition to design Wuhan Greenland Center, which at 606 meters (1,988 feet) will likely be China's third-tallest building, and the fourth tallest in the world, when completed in about five years. Construction is scheduled to begin this summer in Wuhan near the meeting of the Yangtze and Han rivers.

A project of the Shanghai-based Greenland Group, the 119-level Wuhan Greenland Center will be comprised of about 300,000 square meters of floor area, including about 200,000 sm of offices, 50,000 sm of luxury apartments and condominiums, a 45,000 sm five-star hotel, and a 5,000 sm, 27-meter-tall private club with spectacular views at the tower's penthouse level.

AS+GG is leading an interdisciplinary design team that also includes the structural engineering firm Thornton Tomasetti as well as PositivEnergy Practice, an energy services, engineering and consulting company. The other finalists in the design competition were the Chicago office of Skidmore, Owings & Merrill; HOK Architects; GMP Architects; and P&T Architects.

The tower's three corners rise from its tripod-shaped base and taper upward, culminating in an arched tip above the dome at the top. The corners will be of smooth curved glass, contrasting markedly with the more textured curtain wall cladding the body of the tower. The curtain wall will enclose a composite concrete core with steel framing. Apertures in the curtain wall at regular intervals will assist in venting wind pressure against the tower; the apertures will also house window-washing systems and air intake and exhaust systems on mechanical floors.

"One of the distinctive features of this project is the innovative introduction of vents at the tips of the three legs of the tower at vertical quarter sections that will reduce wind pressure on the tower and reduce the vortices that can cause horizontal acceleration of movement," Smith said. "This feature, along with the elegant tapering of the tower, is an essential element in this performative design concept."

In addition, the AS+GG Interiors studio is developing the tower's fluidly sculpted interior public spaces, many of which reflect the tower's exterior silhouette. The conical silhouette is visibly echoed in the entrances to the primary elevator bank from the main lobby, as well as in the shapes of the elevator cabs and other public spaces. The lobbies and other amenity spaces within the tower also feature sweeping, fluid lines and a neutral blue-gray palette that recalls the reflective glass of the exterior wall. The transparency of the ground-floor lobby wall allows views from inside toward the entry canopy drop-off areas, establishing a seamless relationship between the interior and exterior. 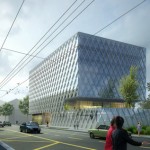 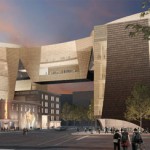