The construction of the Ulma Family Carpathian Museum of Poles Saving Jews in Markowa near Łańcut started on the 8th of October. The building will be constructed according to a design developed by the studio Nizio Design International. Museum in Markowa will be the first institution in Poland that commemorates Poles who helped the Jews during World War II. In 2010, the proposal presented by Warsaw architectural studio Nizio Design International was selected out of 25 projects submitted to the competition. The studio was involved in the creation of the exhibition concept for the Warsaw Uprising Museum, or the main exhibition at the Museum of History of Polish Jews in Warsaw.

The project by Nizio Design International is for a rectangular building, completed with a sharp, triangular roof. The modern body of the building will cut down into the earth. The building will be erected on the square near the main road of Markowa, on the axis of the monument commemorating the events of 24 March, 1944. In Markowa during World War II, the Nazi military police shot Witkoria and Józef Ulma, their six children and two Jewish families, the Goldman’s and Szal’s, who had been kept hidden by the Ulma’s. In 1995, Israel's Yad Vashem Institute honoured the Ulma family with the title of Righteous Among the Nations.

The body of the museum is based on the reinforced concrete construction, finished with a steel siding. The atmosphere of the pre-war town will be recreated through the multi-media exhibition. Videos, maps and old photographs will be displayed on the walls and holographic windowpanes with prints from pre-war homes will be placed at the ceiling. A glass cube, located at the centre of the exhibition, will be the heart of the Carpathian museum. Inside the cube the visitors will discover a replica of Ulma's home, with the hiding place, where the Jews were kept. A precise reconstruction of this place will be possible thanks to the preserved collection of photographs taken by Józef Ulma. The "orchard of memory" will be created next to the museum, to commemorate those killed during World War II, both the Poles and the Jews of Markowa.

Construction of the facility will take 18 months. Completion of the construction is scheduled for the March 2015, while the interior and the exhibition will be finished in the fourth quarter of 2015. 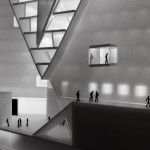 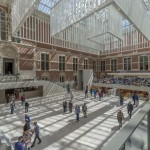