MAD Architects have designed their third museum, the impressive project for Pingtan Art Museum, which just broke ground. Discover more of his engaging design below: Pingtan Art Museum, the third museum design by MAD Architects, has just begun its construction preparation phase. It will be the largest private museum in Asia, claiming a construction area of over 40,000 square meters. The museum's investments total around 800 million RMB and upon completion, its debut exhibition will display over a thousand pieces of national treasures. Being the largest island in the Fujian province, Pingtan is also the Chinese island nearest to Taiwan. In 2010, the 'Comprehensive Experimental Zone' project in Pingtan was officially launched; the island is expected to become the primary location for trade and cultural communication between Taiwan and the mainland in the foreseeable future. The island, which is currently home to fisheries and a military base, will quickly be transformed into an large-scale urban development zone. This new city, which is still under planning, will hold the museum at its center. The museum itself acts as a smaller scale island off the Pingtan Island itself, connected to land only by a slightly undulating pier, which, in turn, bridges artificial and natural, city and culture, as well as history and future. The museum represents a long-lasting earthscape in water and is a symbol of the island in ancient times, with each island containing a mountain beneath it. The island is firstly a public space that is then turned into a museum. The sea, the beach, the oasis and the slope all interconnect with each other, forming a harmonious capacious space with the mountains in the distance. The building is constructed with concrete that is blended with local sand shells. The indoor space, formed by the rise and fall of the formal movements, looks similar to ancient caves. Pingtan Art Museum is built in a landscape setting of an urban city. After its completion, it will create a new space for the city and the city's inhabitants and further inspire them to reflect on the impact made by time and nature. 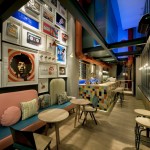 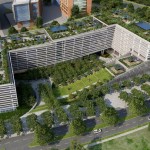