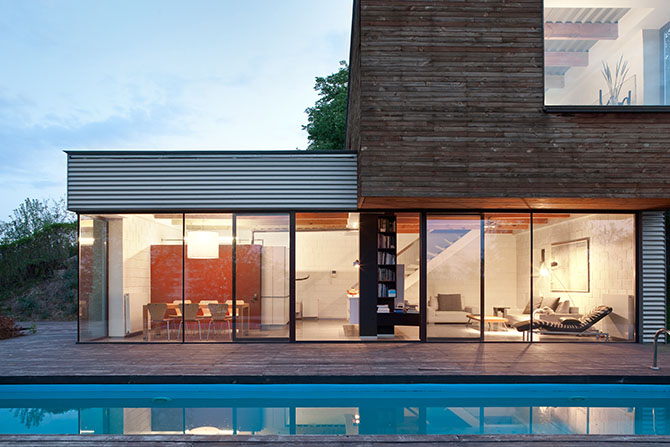 Drozdov & Partners have recently completed their new project – the Anti Patio in Kharkiv, Ukraine. Take a look at the complete story after the jump. 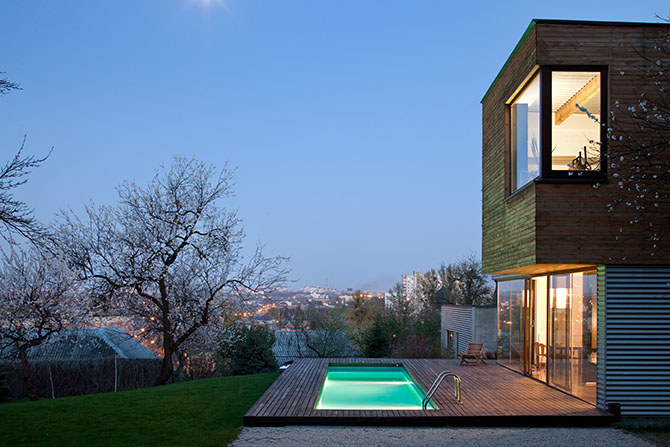 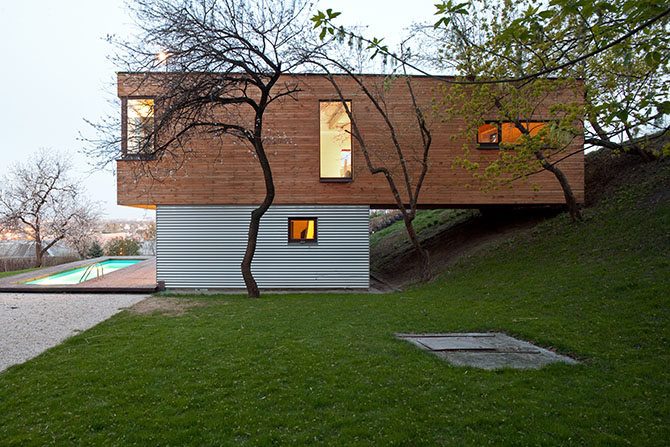 From the architects: As the city of Kharkiv lies on the hills, its urban structure has retained some of its rural neighbourhoods in the immediate vicinity of the city centre on the slopes of the hills, which are not easy to develop. This is the neighbourhood where Anti Patio is situated. The terraced plot is located on the eastern slope of the hill, with a 10-15 km panoramic view over the city.

The steep slope becomes a setting for a laconic composition of three “containers” (60 square meters each). The “guest container” occupies the lower terrace. The other two “containers” – the metal and the wooden ones – are located on the upper terrace. The bedroom container” leans on the slope and on the “common area container”.

The wooden deck with an elongated swimming pool unites the cubit volumes into a common system.

Though the house has two floors, it actually consists of one single room, which ensures natural cross-ventilation. This radical openness is very convenient in case of having a lot of guest around at a time, and is especially welcome in hot summer. The two floors of the house are closely connected with each other.

The ground floor is a day-time shared space which has immediate access to the garden. The kitchen, the living room and the terrace with a swimming pool make the core of the living space. The shared territory of the ground floor is divided into zones, although retaining its coherent and unobstructed nature. The “dividing line” is a partition wall with an embedded TV screen facing the part of the shared space which is a living room, and the kitchen zone on the other side with some cabinets, a sink and working surfaces.

The laconic character of the exterior is preserved in the interior space of the house as well. The decor is reduced to bare minimum, represented by its structural materials. Compositionally, the house enjoys a 180-degree exposure to the surrounding space. The sliding doors unite the ground floor space with the garden. The boundaries are blurred between the interior space of the house and the evolving landscape.

The upper floor of the house also has an open layout. A partition wall above the flight of stairs marks a very symbolic boundary between the bedroom and the bathroom. The latter is not a room per se, but a spatial “pocket” with a particular function. If necessary, the unobstructed space of the first floor can be easily divided into isolated rooms.

Another peculiar feature of the house is its window openings, whose size, proportions and location play a major role in climate control. They also preserve the privacy of the house owners and provide views which are meant to brighten up the laconic interior of the house. Interestingly, the house was designed with strong pragmatic considerations in mind. However, practice showed that this small plot has a lot of romantic features. 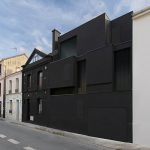