TUNEplanning designed this this contemporary single family residence located in Seoul, South Korea, in 2013. Take a look at the complete story after the jump. Pyeongchang-dong at the northern end of Jongro-gu, Pyeongchang was warehouse of Seonhyecheong, a government office which had managed receipt and disbursement of rice, cloth and coin used as means of tax payment in Joseon Dynasty, under the name of Daidongmi, Daidongpo and Daidongjeon each. As its name derived from Pyeongchang tells, this area had to build a ground up high with embarkment because of its high and slope topography as a village of power and wealth. At the end of the road, we can meet an interesting alley leading to a house of Pyeongchang-dong along the winding ridge of mountain Bukhansan edge which shows the views one by one.
Huge rockwall of this house ‘The piano was drinking, not me’ introduced on this magazine in Aug. 2009, is assimilating with nature while accumulating time with rain and wind as if it has been located there originally. Window and wall sloped obliquely stagger zigzag as they are drunk on nature like tipsy voice and lyrics of Tom Waits’ song, ‘The piano has been drinking, not me’. Whole space was embraced by metaphorical expression whether the wall is sloped or I am sloped. The designer created underground space of this house newly over the years.
Rocky mountain in the middle of Jongno-gu, heart of Seoul. Mountain is nothing but mountain in the distance. However, it becomes an object of faith when it spreads in front of people. The mountain Bukhansan formed by granites adapting to the times may be one of mountains which have such an energy. Bukhansan is the highest mountain in the suburbs of Seoul, has magnificent geographical features, has been guardian mountain of Seoul from old times, and also was called Sambongsan and Samgaksan because it consists of three peaks. (Sam means three, bong means peak, and gak means angle in Korean) As it says ‘celebrated temples are situated in celebrated mountain’, Bukhansan houses considerable places sacred to Buddha here and there. I wanted to attach the much greater importance to the energy of rocky mountain than the region of Pyeongchang-dong. Unpolished beauty felt from pine trees and rocks of Bukhansan which have endured long-suffering has different feeling from the pretty and tender nature in the heart of city. In a sense, borrowing nature may feel disrespectful. Huge rocky mountain Bukhansan embraces Pyeongchang-dong and pine trees rooted in the rock has endured rain and wind. Compared to their scale, I only hope that artificial nature becomes to assimilate with nature through the times.
Dayang Sanghoi was planned as exhibition hall at first, but it is created as private lounge through several changes of plan to office, company training institute, studio, restaurant and cafe for some years. Dayang Sanghoi is a space for client’s leisure and party with acquaintances. It also has a stage on mezzanine for performance. Literally, it is a space which can hold every events diversely and keeps the natural feeling as it is. Therefore, it is named Dayang Sanghoi. (Dayang means diversity in Korean)
It can be said that Dayang Shanghoi is an episode of previous project. While I expressed artificial concrete motivated by natural rook at the previous project, dense pine trees in the rocky mountain are the motif of this project. I wanted to show the natural raw materials such as stone and tree as they are. Artificial nature is doubtedly an imitation. I admitted it is an imitation and wanted it to look like an imitation. Therefore, I aim at fundamental meeting of natural stuff and artificial stuff by showing the processed material property. I placed furnitures unintentionally just like the nature formed without any intentional plan.
I recreated annual rings of pine trees as layers of plywood. A hanging pine tree was also calculated to express a gnarl more directly. Secret room is finished with mirror box and supported by pine tree trimmed roughly. Underground space was very humid because it has been empty for years. I enclosed its wall with metal angles, filled it up with charcoals and stones to circulate humid air, and equipped soundproofing. I placed rock on the floor intuitively while plastering work, and inner rock and outer rock of waterfront play a role to demolish the border between inside and outside.
I have proceeded the project ‘The piano was drinking, not me’ only through shop drawing without any master plan about for a year. Underground space has been empty for 4 years after being introduced on this magazine. Meanwhile, the unfinished ‘The piano was drinking, not me’ has been a burden in my mind, but now I seem to take it off. 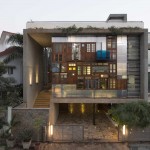 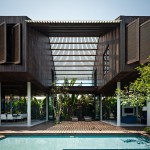