To accommodate the expanding demands of a new family, ADHOC Architectes have renovated and adapted the annex of a farm house built by loyalist settlers in the municipality of Shipton. The house i on of the  final reminders of a time. The architects were assigned the task to complete a brand-new contemporary refurbishment for this almost 200-year-old house while honoring its historical legacy. By transforming a historic outbuilding of the home into an office space, garage, and potential dormitory, in addition to a library that is open to the landscape, the clients were able to enhance the square footage of their living spaces.

The project is located 250 meters from the flour mill, where another historic  stone house inhabited by the mill’s owners—stands. Simeon Minor Denison constructed the house in 1831, and the Denisons lived there until the 1980s. In 2006, a couple with a love of history and literature moved in with the intention of raising their three children there.

“Denison Mills and the Denison House are rich with history. We considered for a long time about what we wanted to do with the annex of the house. Through research, we learned that this outbuilding at the back of the main house served as a large summer kitchen, and in which meals were served for the thirty or so people that the Denisons hired at harvest time. We want to reinvent these activities, and to adapt them to our current needs, while maintaining the grounding nature of this almost bicentennial building in the landscape. ADHOC Architectes presented us with a concept that respects our desire for preservation, while offering us the ideal setting to bring our passions for history and literature to life,”

Beyond considerations for architectural heritage, it was decided that development and usage of the existing building would be more environmentally friendly than its destruction and restoration. When it was decided to keep the building, the architects strengthened it with salvaged hemlock beams. The building’s insulation was made with Val-des-Sources-produced hemp wool, an eco-friendly substance. The architects used sheet aluminum for the roof because of its durability.

“While some historic buildings built in Quebec are falling into disrepair and see their future uncertain, the owners of this bicentennial residence have chosen to renovate, rather than demolish and rebuild. The Denison project thus pays homage to the regional character of ancestral farmhouses, while adapting them for today’s needs,”

The architects incorporated apertures for huge windows on either side of the building to re-establish a connection between the new occupants and the surrounding landscape. On the one hand, they may be opened up, giving residents access to the outside to enjoy in the summer. On the other hand, during the colder seasons, they let in natural light and enable contemplation of the nearby undulating topography made up of both woodland and agricultural area.

Even though it is not exactly perpendicular to the stone house, the annex has always been attached to it. The three-foot-wide walls of the Denison House’s connecting area was redesigned by ADHOC Architectes while keeping all of the openings that were previously present in them. To streamline the entire, an outdoor entry was moved.

The building’s refurbishment resulted in a new living area turned into a literary space, complete with a modular winter reading room and an office overlooking the space.

The use of a mix of minimalist, natural materials, with wood chosen in neutral tones, gives the space a harmonious, contemporary, yet ageless character.  Upstairs, the ceiling is made of painted white wooden laths and supported by exposed beams for a more rustic look.

The other half of the structure includes a garage, where the clients hope to someday establish an upper dormitory area. 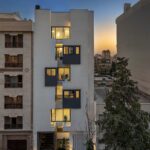 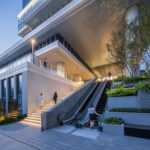