Architect Mário Alves has recently completed his latest residential project in Aveiro, Portugal. The multi-family building is integrated in the city center where its laminated facade follows the cosmopolitan movement on the outside and creates privacy inside. Take a look at the complete story after the jump.

From the architects: The project is based on responding to a specific collective housing program. Inserted in a subdivision located in the new area of the Aveiro city, the land is located between two lots, of which are not built yet. As such, the project idea is based on marking the highlight of a new design in this new area.

The project intends to take full advantage of the characteristics of the place, such as views and sun exposure. The proposed volume is composed of a slatted design to be able to extend the interior space to the exterior, and, at the same time, personify the horizon line present in the place in the project design. Its raw materiality in concrete intends to emphasize its irreverent personality. The glass, in addition to the transparency that it intends to create in the spaces in its relationship with the outside, intends to give the solid horizontal elements of concrete the design of lightness.

The existing movement in the city center is visible in the blades present on the facade. These, in addition to giving privacy to the interior of the dwellings when desired, create a rhythmic effect of shadows that transcribe to the building an idea of movement and constant transformation.

Access to the building is developed from two main entrances. The configuration of the interior space of the house involves placing the social space in the foreground and preserving the refuge and privacy of the private space. 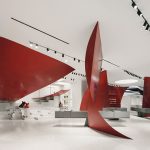 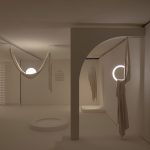