The concept design proposal is based on the social aspect that defines every manufactured product within its geographical scope. This social aspect manifests itself through the design of an externally equipped public space, internal common areas with natural light, an elaborate landscape and hardscape design, a predisposition of interesting observation points and the contemplation of their surrounding context, and the desire to accentuate a constant permeable state between external and internal spaces.

The blatant poetry of the site and the breaking power of the valleys and mountains that surround Malga Fosse are the main inspiring elements of the project proposal.

The initial all-embracing geometry of the project is deliberately simple, with an intentional formal resemblance and materiality which recalls that of a barn, a traditional building typology of this mountainous zone. Two basic geometric volumes appear as pure elements: one is a solid block made of stone at ground level and the other is a wooden block with a pitched roof at the first floor level above. Both these volumes are subject to the strong influence of the surrounding context which manifests itself through modifications at their base geometry. For example, the monolithic stone block at the ground level is broken up by exfoliating the stone on the west façade, allowing the light to penetrate into the interior space across elongated horizontal incisions, yet not completely opened.

The project proposal foresees the use of a structure completely made of wood, consisting of deep trusses and columns that rest on a concrete floor slab at the ground level. The upper volume consists of a pitched roof at variable heights with a double curvature on the north side and a rib structure denounced externally and connected with prefabricated elements entirely made of wood. The overall construction of this wooden volume occurs from an assembly of prefabricated elements on-site with the rib structure organizing the distribution of all secondary (both internal and external) structural elements.

This primary structure has spans of 850 mm between each rib, with a secondary structure organized as internal bays which define the openings towards the outside, dictating both the paneling of the roof, ceilings and pavements inside. There are three longitudinal spines spanning from east to west, embracing all the ribs together. Along these longitudinal spines, the ribs define the bays of the rooms from the corridors, as well as stiffening the primary structure. Also arranged along these spines, in a single volume entirely made of wood, are the room service areas, bathrooms and closets. The rib structure is distributed into evenly efficient spans, which in turn subdivide and distribute the bays, separating thus the adjacent rooms while acoustically isolating them. These ribs become lighter and open gradually towards the panoramic view of the valley, such to create a form of "telescope" towards the surrounding landscape. At the bracing of a single rib, the partitions of the bays of the rooms are used to strengthen the structure, avoiding the need for a truss system. 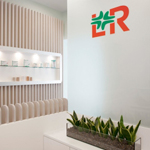