"360°" is a project designed by architects Nikolas Plastiras (NoScale) and Iro Raptaki (StudioPE) for the "Room for London" architectural competition. Situated on the rooftop of Queen Elizabeth Hall, one of the most renowned public buildings in London, it is an attempt of combining a recognizable structure of unfamiliar use with the most recent demands of hosting during the Olympic Games of 2012. The aim was to host a type of space that would act as a temporary receiver for tourists in an alternative, privileged point of London due to the unobstructed views offered.

The design’s objective was the production of a form that would serve both as a landmark – a reference point during the day as well as a “beacon” for passersby during the night. The creation of a “lightweight” structure in terms of morphology, materiality, geometry and construction clearly differentiated from the existing austere volume of Queen Elizabeth Hall was a very conscious choice.

Towards these directions we came up with a plan of a flowy circular glass volume that allows 360° views of London. This volume is composed of three different zones of transition from the most private to the more "open" and is unified or isolated with auxiliary light structures according to the desire of the tenant. These zones are as follows:

–      The “living” unit including the bedroom, bathroom, dressing room and storage spaces,
–      The “relaxing” section consisted of a sitting area, a working area, basic kitchen amenities and a relaxation space and
–      The patio, that allows viewing of the river and the city beyond in the form of a sheltered outdoor terrace.

Curtains, protection binds and louvers mediate the requirement for privacy and shading. 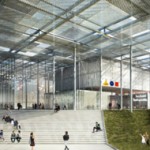 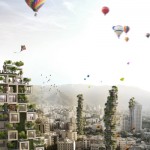