In a few words:

One hundred meters away from the coast, an artificial island, the ‘urban Wave’ interferes with the landscape, follows its rules and the natural movements of the environment and creates a whole new area. An area full of fluid spaces and routes, that invites the guest to explore and create his individual paths. The intervention hosts cultural activities and at the same time offers the guest a pleasant environment to rest and relax. Last but not least, it celebrates the history and the culture of the place by hosting a summer cinema, which is so much appreciated in Greece.

The proposal is about a volume that is not placed statically in the middle of the platform. It is formed organically, based on the dialog between the natural and the artificial elements around it. More specifically, it is based on the movement of the water and the creation of waves, and it blends with the movement of the people inserting the platform. Following these principles, the creation of the main volume comes out to represent the "urban wave", a wave formed by social activities.

The "urban wave" goes against the rules and develops itself toward the sea. The same way as in nature, the civic wave is surrounded by a fluid surface, followed by smaller waves that form the morphology of the intervention.

The interior space represents the central wave at its pick point with an area of 450s.m. which starts from point zero and grows itself to 6,50m high. Within the same context the exterior area forms itself following the fluidity of the movement of the sea. Owning the characteristics of smaller surrounding waves the exterior formations develop to a maximum height of 2m and host the rest of the activities.

The intervention aims to create an environment which promotes culture and at the same time offers relaxation. Inside a multifunctional space is created, while outside artificially formed environment offers places where you can seat, relax, enjoy the view or play. More than that during the summer time, the platform is transformed into an exterior cinema. All these activities, interior and exterior are not disconnected from each other. A wooden surface, working as the skin of the construction, grows from the interior to the exterior and vice versa, connects the spaces and lets the guest experience the platform as a whole. 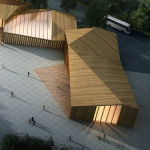