Project: Green Catalyst
Designed by Kamvari Architects
Location: Tehran, Iran
Website: www.kamvariarchitects.com
Exploring a fresh concept in architecture Kamvari Architects change our views through their design of Green Catalyst. Instead of reducing the green space with population increase, they manage to accomplish the exact opposite. Discover more after the jump:

With an ever increasing population and a demand for more and more housing stock within urban centres we are facing a reduction in green open spaces.
Statistics indicate that in the 1900’s only 10% of the world’s population lived within cities, in 2007 this had risen to 50% and it is expected that by 2050 this will increase to 75%. With such statistics the question of urban public realm is becoming a crucial one to answer. Parallel to this the production mechanism for the support of cities and the efficiency of these mechanisms are being strained. Currently for the purposes of efficiency we see large scale production and recreational space as separate to needs of the occupants of the city with these functions often being located on the outskirts of the large metropolitan areas requiring a commute.
We feel that if we look towards a more integrated approach we could begin to challenge current modes of thought and highlight certain potential in the mixture of these elements.

Green catalyst attempts to look at the high-rise typology in combination with public realm and small scale Farmland (production surfaces) to address and rebalance the urban condition. We believe that through a different approach we are able to generate a new typology where in addition to high quality living we are able to produce much higher social and economic interaction and to ultimately generate high rise communities rather than high-rise towers.
To test this theory we have chosen Tehran the capital of Iran as a scenario. The city at the moment suffers from a lack of public realm and architecture which exclusive of social interactions. In this city the battle between urban housing and public realm is being lost at the expense of all.
The distinct lack of urban space combined with the geographical situation of the city has had an extraordinary effects on pollution, as well as social and urban conditions.

Despite this, the general provision of housing does not consider how it will contribute to the resolution of this issue in addition to those states above.

We believe that if we begin to think of the high rise typology not as extruded volume’s maximising profit but as a devices or catalyst capable of bringing a balance between the built and the green we can begin to describe structures which at their core deliver higher quality live able space but also begin to contribute towards other aspects such as the reduction of pollution, social interaction and also micro production of food. This change will challenge the current mono functionality of buildings and begin to take into consideration and take responsibility for other issue.

High-rise. Current high rises whilst offering dense living space do not consider social and performative conditions. There are usually no provisions for collective or individual outdoor space and no encouragement to engage with other and the architecture.
This usually results in the box in the sky separated from all and contained with quite defined architectural statements. Urban catalyst will challenge this notions through offering the exact opposite.

Courtyard Typology. Our point of departure for this project is the traditional courtyard typology as seen throughout the middle east. Iran has some of the finest examples of such houses , which in very simple ways achieve passive performance. The courtyard typology through it definition is not one which can be considered social as it is an inward looking typology. Here we have pushed the courtyard to the exterior of the building using it as means of describing open amenity space.
This exterior spaces when combined and intelligent way offer the potential of connection to other and through this the provision of a hierarchy of open amenity space. These terraces and open spaces whilst serving the purpose of amenity can be tweaked and optimized in terms of vegetation to aid the polluted city air as well being used for the purposes of production. Design Optimization. The use of the simple courtyard typology combined with an algorithm which assess a number of issues ranging from the relationship between interior and exterior condition, the provision of self shading and the amount of insolation allows us to optimise the courtyard performance toward the site and high rise typology.
These conditions testes assessed and optimized at the local scale are magnified when combined vertically creating a number of emergent qualities which highlight possible modes of occupation for the future.

The proposal is also assessed at the regional scale to understand the combinations of different typologies and how these perform together within the specific environment. Once assessed the results are fed back into the process to generate a second evolution of the tower, this process and feedback is then further reinforced through a parametric description of the window opening which are optimized to direction and height within the tower, so lower levels which would require more light would have larger openings. This allows the entire proposal to respond to the conditions within the specific climatic situation as well as generate possibilities for social interaction. Construction Methodology. The use of simple cubes which are easily prefabricated and delivered and assembled allows us to explore quite unique conditions.
Each unit composes of 4-8 pre fabricated cubbed delivered to site on the back of a truck, these boxes are received and arranged in regards to the predefined optimized organisation once assembled they are lifted into position and connected to the structural core. Materiality. We are proposing to use Khesht a form of surface treatment used in traditional Iranian Dwellings as means of covering our units. khesht although primitive offers great thermal and insolation properties . these potential and their proven record can be further reinforced through the use of modern material to resolve their fragility which will allow us to explore it as potential for surface covering for the tower. 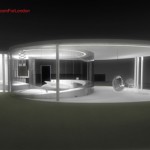 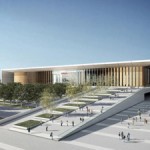