Zyme Studios has recently completed the design of their latest residential project – Oscillation, located in Yucca Valley, California. The studio’s approach leans toward the metaphysical. It combines the functional with the  experiential qualities of space.

The heavy mass ascends with the natural rock formations in an effort to represent how little the human form appears in compared to the desert surroundings. The user is guided down an artificial canyon using forced perspective with both void and shape in order to create tension prior to the release of admission into the residence. As one enters, openings both visible and tangible frame the area, further reducing compression and allowing for views and cross-ventilation. The 3,000 square foot house is surrounded by heavy boulders, which are mimicked by deep overhangs and strong walls to provide shading and thermal heating and cooling. With tailored views from each public and private room, the building’s form interacts with the hillside by weaving through the rocks. Inside are four bedrooms and five bathrooms.

The triangular shape of the house makes the most of the natural elements of the site while enabling sustainable site design for each facade. The west wall, which is the biggest and most exposed, is protected by tall rocks, which keep scorching breezes at bay all day and give the bedrooms and communal areas views of the surrounding natural scenery. Solid walls in the northeast take advantage of the severe daily temperature swings by providing thermal bulk. The desert’s arid climate makes passive cooling possible at night. The pool also creates an evaporative cooling effect in the courtyard to the east, which is boosted by the cross ventilation offered by the home’s moveable windows on the east face. 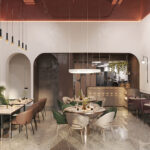 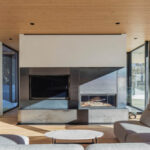