The site for this project is located at the west side of Hangzhou new city, 2.6km to the CBD center. The facility has a total built area of 15,500 square meters. Above ground floor area is 46,700 square meters. The southwest corner is the entrance for the planned Metro Line and around the site are high-end residential districts. The north side is bounded by a primary school. Adjacent to Qian Jiang River, the site is a connector between the natural and urban life of the city, making it a perfect location for a sports complex. Our project is based on creating an urban plaza while also creating an icon for the lack of large-scale commercial facilities and distribution of leisure spaces. With the convenient transportation, the sports center radiates across the whole city.

Since the first rays of the Olympic flame lit by the sunshine of Mount Olympus, the mountain is deeply connected with sports. Hangzhou is a hilly city. Mountain climbing always becomes a popular out-door game for people there. The government carries out mass sports activities to promote national fitness program. We gave the concept of "SPORTS HILL" to create a "sports mountain” for the city.

We create a new synthetic ground for sports activities while also an iconic figure against the relaxed background of the sports landscape. This building is a symbol of the new status of Hangzhou as one of the six ancient capital and international city. From a massing view, we design the podium and 42 meter tower in a stacked way in order to contrast with the complexity of the 70 meter tower. The roof is interconnected to make a continuous, differentiated sports landscape with cascading sports fields and pathways. This landscape features basketball courts, volleyball courts, badminton, and tennis, at various levels. The steel frame of the podium becomes the major structural piece for the curtain wall but also houses the circulation element for the facade. The sunken plaza becomes a big open space which has been designed as a microclimate ecological environment facing the school. It also can be entered from the civic square on the southeast.

The set back of the south side create a rectangular civic square. The civic square and the green belt integrate into a 6000 square meters long main entrance space. The civic square distributes the flow of people pressure from the major and the Metro Line and is covered with landscaping. The entrances that lead into the office building and the east recreation center are located on the west and east side of the squares respectively. The sunken plaza connects with the civic square to increase the depth of field effect. Three ground plazas, one sunken plaza plus a wealth of roof terrace plaza space create a rich and varied public area in order to attract more people to experience and stay longer within the design reflecting the lively atmosphere of a strong national fitness.

The sunken plaza is 1.2 meters underground, which connects with the entry square by folding shaped steps. The garden plaza is shaded via a cantilevering roof, and a series of pools underneath allow for evaporative cooling to occur, while also interacting with the swimming pool behind the curtain wall, creating a lively water environment. It is spatially defined on all sides by topography, plantings, shelters and the plaza roof, creating a highly specific and integrated environment and small microclimate. The plaza roof and canopies offer shade, while plant-life and water features cool the air underneath based on principals of natural convection and evaporative cooling, creating a thermally regulated environment. This space is a lush and tropical atmosphere including public amenities such as gift shops, bookstores, and cafes, allowing people sanctuary from the stresses of city life.

According to the different type of space, we divided into two parts: “active” and “inactive”. Sports activities are located on the lower part of the tower and the podium, in clear groups for ease of orientation piled into a single piece of “active " area. The top of the tower is planned as a relatively “inactive” area with office, accessories and the VIP Club.

These two towers and podium are combined into a lively multi-stores complex where people can engage in sports indoors at all times of the year. The Swimming center is located at the first floor of the complex, nestled underneath the cascading sports landscape. All pools are contained within a grand open space making it a memorable and urban swimming experience. It can be entered from the south facade or from the civic square.

The recreation center is connected by the two towers on the southwest and northeast. It is organized by passageways which connect the sides of the site together into a network. Skylights provide daylight the interior spaces and offer views of people playing sports outside. Ground level functions such as galleries and restaurants cater to the general public, making the space a community center as much as a sports center.

The main tower and podium is wrapped with three folding pieces, which covered with cellular aluminum. The twisted-folding shape has a dynamic trend of an upward spiral, which makes the tower an increasingly upright illusion. The trend of folding shape determines the density of the skin texture.

The design features faceted crystalline geometry embedded with crystal patterns in 3D cold lamination film, ETFE membrane, and local-shaped glass structure. They were wrapped into a tower on four facades hybridizing the graphic and the 3-D dimensional, hybridizing the depth of space, to create the illusion of volume in space, which achieves new complexities between flatness to depth and depth to flatness. They are used to heighten the sense of irresolution between flatness and depth as well as correlate graphic/pattern effects with mass inflections. The design features massive membrane bubble ‘windows’ oriented to allow views out to all angles of the city. The perforated stainless steel panel on the wall strengthened the crystal shape, as an attraction landmark for the city.

The recreation center and swimming center will be constructed out of reinforced concrete frame and slab construction for economy. Certain areas such as the pools and large gaming courts will feature column-less spaces and increased beam depth. Other spaces will relax back into a 9M x 9M economical grid spacing. This column grid will be carried all the way down through the parking garage in the basement. The long span facade will be made from deep sculptured beams which will be stabilized by interior armatures. These beams will also contain the mechanical systems of the space.

The south side facade connects the Podium and 42 meter tower through the transportation space. Five canopies are not only the supporting connections for the steel frame, but also offer shade. The external steel frame highlights the idea of a ladder and merges with the outer shape of the aerial layer, which makes an elegant liquid motion of a fluidity and dynamic transition. 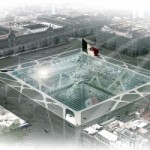 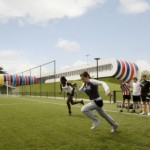