The new Fragment rental apartment complex designed by QARTA Architektura is nearing completion. Fragment’s goal is to establish wholeness and harmony between the conflicting architectural histories of the towering, free-standing modernist Invalidovna housing estate structures and the traditional city block. Two converging wings suggest a city block pattern on one end, while a single volume recalls the solitary modernist approach on the other. The pixelated façade alludes to the city block’s dissolution.

The design’s main concepts are openness and transparency. The spatial linkages with its surroundings are crucial in terms of continuity, permeability, and overall public space enhancement. As an intrinsic component of the concept, monumental sculptures by David ern span the public and private spheres and enhance the Fragment’s urbanistic role. Discover more after the jump.

Although Karlín started out as an industrial district of Prague, it has transformed dramatically during the last few decades. In the everyday life of the wider Prague city center it plays a part determined largely by this ongoing transformation. Considering all the requirements of modern living, Karlín has become popular for housing, work and leisure.

For the new Fragment Apartments we have come up with a unique and visually strong architecture, which is responsive to the context, both past and future. In addition to formal and functional aspects, a natural connection to the surrounding public space is what extends the building out, makes it more accessible and completes it visually and functionally. A monumental David Černý sculpture is an integral part of the program, resulting from artistic collaboration on the project from the very beginning.

The whole area has been revitalised gradually, which meant the original scale of the old Karlín could be preserved. On the other hand, the tall, free-standing buildings of the modernist Invalidovna housing estate form a counterweight to the traditional city block pattern. Fragment Apartments are located on the boundary between these two zones. Reacting to the contrasting architectural histories, their purpose is in finding completion and harmony.

Overall architectural form composed of two converging arms or wings reflects the trapezoid shape of the plot and the character of the surrounding development. The Fragment becomes the embodiment of the transition, or rather the intersection of, two worlds. On one end, two volumes imply a city block pattern, on the other end, a single volume recalls the isolated modernist approach. The pixelated quality of the façade also suggests the process of disintegration of the city block.

A very close contact with the historic Invalidovna building was another defining moment in the project development. “With all due respect to the Invalidovna’s architectural quality and the energy of this unique place, we chose a contrasting position, an imprint of the contemporary era, for the Fragment building. We bring a dialogue between equals – the existing and the new – as our contribution to the Karlín transformation. We see this dialogue as a logical prerequisite to a quality development.”

Fragmented Structure of a Compact Whole

The floor plan shows the two volumes resting together on a unified transparent plinth of the ground floor. Going upward, the dynamic movement of individual fragments reflects the changes in interior and exterior environments. The loose and playful shape is contextual, not formal.

As a form of communication with the changing scales of the surrounding development and other contextual factors, a careful cascading of the building mass was implemented. Its purpose is, on the one hand, to compensate the heavy traffic on Rohanské nábřeží, and on the other to capitalise on the agreeable qualities of the local environment, like the immediate proximity of the Kaizl Orchards or views to important landmarks, like the Vítkov hill nearby.

The cascading form of the building also helps optimising the positions of the individual apartments and the courtyard in relation to the sun movement – the courtyard opens up, and the space expands and stays playful. Boxes jutting out at different places up and down the building cause a light and shadow play, strengthening the perception of the changing nature of the façade, and the forms, over time. From eye level, the boxes help to fragmentize the volume and bring it closer to the human scale.

Openness and transparency are the key themes of the design. The spatial relationships with the historic Invalidovna building and the park are important in terms of continuity, permeability and general improvement of the public space. A natural trajectory of movement flows between the two volumes. In its mouth, the building is split apart, carved out. Here the visitor enters a generous covered space with sculptures, greenery and water features, offering both the residents and the public a peaceful and relaxing atmosphere. The building is pedestrian permeable in this direction. The public can also access the ground floor space with small shops and services. The courtyard is a quiet place, partly paved and partly filled with vegetation, including the roof and the first floor.

For a dynamic building, the structure is a key attribute. Initially, the architects considered a complex precast solution starting with a conceptual design, followed by optimisation, transport and assembly on site, including a precast bathroom. In the end, the client chose a reinforced concrete structure.

“What we value most about the whole process is that the building form hasn’t changed from the initial sketches to the complete building, and not just for aesthetic reasons but for technical reasons, too,” says lead architect David Wittasek. The few small corrections that were implemented were to make the load-bearing structure more effective.

For the façade, several technical solutions were considered. The most important thing was to keep the original shape and proportion of the boxes and loggias. All the details had to fit perfectly, look nice and work exactly. This is why today, construction happens mostly in workshops and becomes almost like mechanical engineering. The Fragment building was no exception to this trend. During assembly, windows were fitted first, and the ventilated façade second, due to technical reasons.

The façade is made primarily of aluminium composite panels. The fragmented surface is exposed to the elements and therefore promotes the feeling of a changing character, a living building mode. The city and the building are living, unfinished processes.

The building is equipped with 21st century standard technology like green roofs, solar panels, heat pumps or water management and it uses its own underground water source. 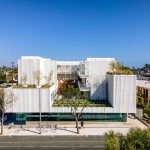 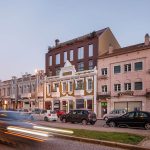