MIND Design recently completed their latest project: Yinchuan Vanke Metropolis, and experiential sales center in Yinchuan Ningxia. The developer and Mind Design teams originally conceived an urban complex to create supporting facilities for a life community, and a functional planning clearly different from traditional sales departments. Take a look at the complete story after the jump.

The cognition of world culture is always changing. Yinchuan Vanke Metropolis emerged with its fully new and strong commercial and artistic concept. The project was jointly designed and built jointly by the Mind Design and developer teams. With its distinctive aesthetic style and multi-dimensionally extended spatial perspectives, it stimulates and promotes the operation of the city by use of criticization, breaking and creation.

Since Vanke Mid-lake Island in Xiamen, the Vanke Metropolis series has expanded across China over the past 10 years, from the first-tier cities in eastern China to those in central and western China. Every commercial expansion is a bold attempt at urban planning and operation modes, and also an iterative change of design and living concepts.

The Vanke Metropolis project also continues its noble, elegant and post-modern architectural features, while its plain colors harmonize with the cultural, historical, environmental and other elements of northwest China in Yinchuan.

From the inner courtyard into the community lobby, this is a place to interrupt city noises. Its elegant and soft design provides a buffer zone between indoor movement and outdoor tranquility, and between outer roughness and inner delicacy. It also promotes a dialogue between people and the environment, and between mind and the world.

Yinchuan Vanke Metropolis is located in the central life district (CLD) planned by the government, neighboring the southern business district under construction in Yinchuan, covering Wanfang Shopping Center, JianfaYouyue City and Yinchuan Cultural Park, and adjacent to Qizilian Lake with an area of 4,000 Mus on the east. Such superior geographical location and rapid urban changes have prompted builders to make a difference.

The developer and Mind Design teams originally conceived an urban complex to create supporting facilities for a life community, and a functional planning clearly different from traditional sales departments. Therefore, the criticalness and originality of spatial function and design can be seen everywhere in the interior space.

The corridor of the Open Audio-Video Area was inspired by and benchmarked with Fifth Avenue in New York. A large number of LED screens were installed here to highlight the commercial atmosphere and technological sense of the integrated exhibition area, and to improve the prosperous living experience in southern Yinchuan.

The developer and Mind Design teams hope that this kind of indoor and outdoor brand exhibition can reflect the senses of fullness and quality of the project in the early stage. In combination with large facilities such as Youyue City, the cooperation between Vanke and Jianfa would generate a complex with the best quality and the best supporting facilities in Yinchuan.

The construction of the large complex JianfaYouyue City will be completed soon, and the density and concentration of consumers will soar as a result. A large proportion of real estate contracts of Yinchuan are concluded for projects in South Yinchuan currently. Therefore, for the convenience of customers, a more convenient and contract signing center integrating banking was created jointly by the developer and Mind Design teams as required by the actual situations.

In addition to the Contract Signing Center, the design team also designed a rest area for family members inspired by airport lounges. It is equivalent to creating a place to serve their families for Vanke owners in the Vanke Metropolis community, even it is close to the bustling business district.
A scenario is expected in the future, where a wife does some shopping in Youyue City, while her husband is playing games and drinking afternoon tea in the Rest Area, both enjoying the community service and waiting for his wife at the same time. All Vanke owners can come here to rest, and their independent sense of dignity is strengthened from the perspective of configuration.

Based on the neoclassical tone, the overall interior space of the Metropolis project integrates the essence of Greek and ancient Roman classicism, namely, elegance and delicacy, forming a strong contrast with the rough style of Yinchuan which is located outside the Great Wall in northwest China. The designers decorated modernism with the traditions of classicism, took natural materials as the media, and adopted contemporary design thinking and aesthetics to create a neoclassical real estate club which looks lightly luxury.

Wang Dacheng, the founder of Mind Design, commented that design is the art to serve the visual feeling of persons, and they always design projects only after both owners and consumers are satisfied with their design proposals.

As a new model of urban space, modern high-quality life supporting facilities need to be emphasized with thick and heavy colors. Therefore, Bulgari’s classic aesthetic style has become the main concept of this project in the discussion between developer and Mind Design teams.

Bulgari’s history of nearly 137 years has not only witnessed the evolution of the Italian classical culture, but also constituted an important chapter in the development history of the world’s top jewelry art. Its distinctive aesthetic style also forms a model of interior design in the world.

The project belongs to the Vanke Metropolis series. The Mind Design team was attracted by Bulgari when designers were looking for a new story line and the most moving elements during planning the project, in addition to the Metropolis style at which they are good.

Bulgari itself is a classic of luxury goods in the world. Its color tone is elegant, deep and warm, and thus quite suitable for Yinchuan’s tone and weather. Therefore, the whole project is full of noble and luxurious temperament, from the inner courtyard to the landscape and interior.

The design team has upgraded the original Metropolis style, so that it is of more dignity, topicality and theme-orientation, which fill the gap of local architectural styles in Yinchuan and also wins good response from consumers.

The designers cleverly combined classical and modern elements by integrating the iconic aesthetic features of Bulgari into minimalism through the collision of black and other colors, and meanwhile reinterpreted the unique elegance and nobility of the space by combining the design language of the building itself.

With the increasing scale of the business district around the Metropolis project, there will be more and more catering space. The developer and Mind Design teams intended to provide a different dining space with better hardware and more privacy, so as to provide owners another choice for more convenient private banquets. Considering the characteristics of local halal food in Yinchuan, the designers created many professional kitchen configurations and design elements.

By breaking the whole into parts and assembling parts into the whole, the designers made compound and diverse functional planning for rich service scenarios. Yinchuan Vanke Metropolis combined those supporting facilities above and below ground to create an eternal urban classic project with its experiential sales center, super avant-garde life perspective, ultimate color aesthetics, and international viewpoint. 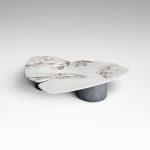