“We designed the Bowes Center as an expression of the Conservatory’s mission, where students and the public can come together to experience music in a welcoming, inspiring space.It’s so gratifying to see it come alive; we hope the building inspires students to learn, connect, and create, in the context of the city’s performing arts leaders.”

The $46.4 million grant from the William K. Bowes, Jr. Foundation, the largest financial gift ever made to a music school and whose namesake was a lifelong trustee and supporter of SFCM, is commemorated by the naming of the Center. The Bowes Center creates accommodation for up to 420 students within walking distance of the Ann Getty Center at 50 Oak Street, which has served as the Conservatory’s home since 2006. Additionally, there are 27 rent-stabilized apartments in the building, which enhance and replace the previous occupants’ existing flats from the old structure on the site.

The exterior is made of white and translucent glass, emphasizing openness, engagement, and light in the design. The Bowes Center encourages onlookers to view concerts through floor to ceiling windows in its bottom floor jewel-box Cha Chi Ming Recital Hall, which is filled with the sights and sounds of music. With floor to ceiling windows, the 200-seat Barbro Osher Recital Hall, adaptable event space, and a roof deck with unrivaled views of City Hall, Davies Symphony Hall, the War Memorial Opera House, and other landmarks, the top two floors shine brightly at night.

The Cavagnero team created a unique curtainwall system that combines all of the building’s acoustic requirements into one seamless envelope in order to achieve a cohesive design language and meet the high acoustic demands, which vary from floor to floor and are complicated by the building’s close proximity to Van Ness Avenue. Cavagnero tested the limits of glass’s acoustic performance by working with Kirkegaard Associates, Tipping Structural Engineers, and curtainwall maker CS Erectors. To isolate noise and vibration transmission from the street while keeping transparency into the performance areas, the design uses double-glazed walls and a floating structural slab. The double-glazed system adds an additional heat buffer and a sustainable component to the design.

Students enrolled in the Conservatory’s Technology and Applied Composition Program have access to studio space, classrooms, and hearing rooms at the Center for New Media, located on the second floor of the Bowes Center. Students in the Roots, Jazz, and American Music Program at SFCM, which was developed in collaboration with SFJAZZ, also utilize the facility. The underground levels of the building contain classrooms, keyboard labs, a black box Technology Hall, and a recording studio for all SFCM students. One, two, and three-bedroom apartment units, each acoustically isolated for practice, are located on floors three through eleven. As an outgrowth of the Conservatory’s ground-breaking collaboration with the nearby SF Ballet, one level is set aside for apartments for students of the San Francisco Ballet.

A ground floor with a jewel-box recital hall, visible to all passersby through floor to ceiling windows, a student center with social and study spaces, and dining from Chef Loretta Keller, known for her work at San Francisco’s Coco500

A Center for New Media on the second level with faculty offices, lesson rooms, and critical listening rooms for students participating in the Conservatory’s Technology and Applied Composition Program and the Roots, Jazz, and American Music Program.

Studio and one-bedroom apartment housing on floors 3-4, to replace a dilapidated apartment building that was previously on the site. Former tenants are moving into the new building at their prior rents.

Two and three-bedroom student housing units on floors 3 through 11, each acoustically isolated for practicing. One floor is dedicated to housing for San Francisco Ballet Students, an extension of the Conservatory’s unprecedented partnership with the nearby SF Ballet. 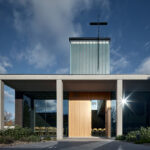 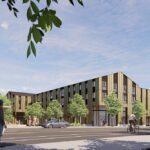