Cultural Complex Luz will be an important addition to Latin America’s largest cultural district, which currently includes the São Paulo Concert Hall, the Free University of Music, the São Paulo State Pinacoteca, the Júlio Prestes train station, Luz Park, the Museum of Portuguese Language, and the Museum of Sacred Art. Together they will form an urban necklace of alternating green spaces and buildings which will establish a new cultural destination closely connected to the Campos Elíseos region, a central area in São Paulo. The project is also part of a larger operation to regenerate Luz – one of the most dilapidated areas in the city. By combining education, culture, arts and events, the Cultural Complex Luz aims to bring enhancements to the surrounding neighbourhood.

The Cultural Complex Luz aims to bring together dance and music, students and professionals, performers and audience, production and rehearsal in one place. As the home for the São Paulo Dance Company and the 2000-student Tom Jobim Music School, the complex will include a 1750-seat Dance Theatre, a 500-seat Recital Hall, and a flexible Experimental Theatre with up to 400 seats to be used primarily for dance but will also host opera, theatre, and music performances. The concept envisions an open and lively cultural destination, a truly public centre filled with diverse activities where a high degree of visibility and accessibility will encourage interaction between different generations and professions, and between guests and hosts.

To enhance the planned uses and programme mix, and create greater variation of spaces, the building consists of interwoven horizontal bands which cross at split levels. These wide, linear bands act like city streets to allow for dynamic and diverse exchanges between the performance spaces, lobby, schools, rehearsal rooms, offices, and workshops. Their specific composition maximizes proximity and visibility between the different parts of the building while allowing the necessary divisions and security boundaries. The weave of bands forms a mesh of built and open spaces, which, like a loose net laid on a forest, allows trees to penetrate and for every space to have direct contact with light and greenery.

The main entrance is provided by the Grand Ramp, which is simply one of the slabs projecting out and sloping down into the grounds of Julio Prestes Plaza. This strong inviting gesture creates an elevated plaza that acts as a new outdoor performance venue between Sala São Paulo and the Cultural Complex, and establishes a natural and prominent public entrance for pedestrians approaching from the metro and the train stations. The ramp also will be the main access path for those arriving by car via the drop-off area or the 850-car underground parking.

The Grand Ramp enters directly in the heart of the Complex, and is the main orientation and distribution device in the building. A generous crossing provides a sweeping panorama of all programme elements. From this central place, one can get information about activities in the building, pick up tickets, descend to the garden and café on the ground floor, ascend to the Dance Company foyer or the Music School main entrance, go to the restaurant and bar which overlook the Julio Prestes Plaza and Sala São Paulo, or proceed to the lobbies of all three main performance venues. This is the largest gathering space in the complex and is intended to bring together the visiting public, daily users, and staff of the complex as well as the audience for the performances. During a performance evening, the foyer and the lobbies turn into festive spaces through light, ready to host a formal crowd and prepare the audience emotionally for the performances.

The main performance venues – the Dance Theatre, the Experimental Theatre and the Recital Hall – are nested within the network of interwoven slabs and anchor the building at three key locations, allowing the performances and their audience to activate the entire complex. The Dance Theatre is approached through a lobby that is on the same floor and leads directly into the main seating level of the theatre. Inside the theatre, the straight building slabs turn into sweeping geometric curves to focus on the proscenium opening of the stage. Most seats face the stage frontally, allowing for the best view of the dancers and their performance. To complement the larger Dance Theatre, the Experimental Theatre provides more flexible seating and stage layout. It will accommodate a diverse range of performance outside the framework of the classical proscenium hall. Its flexible layout and removable seating allow this hall to be used in a variety of future scenarios as a multipurpose event and catering space, in a prime location between the main lobby and the future garden to the South-West of the Complex. The Recital Hall, a smooth organic shape placed in the garden adjacent to the Music School, creates an exceptional moment in the Complex. Its lobby and entrance are in the garden. Inside, balconies follow the oval footprint and define the strong vertical space. This hall provides an intimate venue for chamber music, but its expandable stage will also allow it to accommodate rehearsals and performances of choirs and full symphonic orchestra.

The Dance Company is the backbone of the Complex. It occupies the largest slab, running the full length of the building. Its spacious rehearsal spaces are a main feature of the building, defining its grand scale and allowing natural light into the core of the Complex. The dance rehearsal spaces are conceived as a network of activity centres within the complex, the largest rehearsal space being placed above the Grand Ramp. The Dance Company is equipped with all necessary workshop and support areas and has direct and convenient access to the theatre stage, delivery, and support areas.

The Tom Jobim Music School has the largest population in the complex. More than 2000 students from 6 to 35 years of age and their teachers can gather in the Student Plaza, which acts like a covered school yard elevated above the gardens. From the plaza, the school extends the classrooms, practice spaces, rehearsal halls, or to the Recital Hall. A large diversity of terraces, passages, and school stairs offer infinite possibilities for get-togethers and spontaneous exchange.

The landscape of water and green plants plays a special role in the Complex. The parks on both sides of the building flow through the Complex. Lush tropical planting forms a dense green carpet, grows around the slabs, rises along the lobbies and rehearsal spaces, embraces the entire building and pushes through the roof line. The green landscape creates a specific micro-climate and complements the numerous open public spaces that offer places for formal crowds, everyday gatherings, work meetings, spontaneous sessions, recreation, and improvised performances. 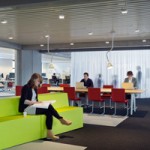 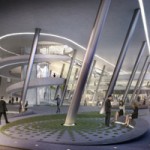