French architects ateliers o-s recently completed the extension of a school located on the border between Switzerland and France, in the village of Lugrin. Extending over a succession of terraces dominated by the first foothills of the Alps, the town and school offer one of the most beautiful panoramas of Lake Geneva. Discover more after the jump.

From the architects: On the border between Switzerland and France, Lugrin extends over a succession of terraces dominated by the first foothills of the Alps. Located opposite Lausanne, the town offers one of the most beautiful panoramas of Lake Geneva. Situated in the very heart of the village, behind the church and the town hall, the school group, for which this extension is considered, nestles between an independent school for girls dating from 1850 and a town hall-school building for boys from the 1950s. Combining the metabolism of its territory and the growth of its population, the complex has already been through three extensions and restructuring works. Adding another block to the building, our project has once again increased the capacity of this installation by providing it with new half-board premises, a new courtyard, 4 rooms, including 3 elementary classrooms and a visual art room, each with a capacity of 30 students, as well as common rooms.

Dove-tailed into the topography of the land, the actual building consists of several adjoining volumes, fitted into the slope in a rational manner by implanting these at half-levels. In this rich architectural composition, our extension will forge a close relationship with its comrades, and add an autonomous, unitary and rigorous volume on the site. The building has a parallelepipedic appearance in Corten steel, which stands out on the horizon, set on a rough concrete base deeply anchored in its soil. The upper floor houses the new catering area, and the basement houses the elementary classrooms, and the two programmes express their independence through their materiality. The natural gradation of steel delicately blends in with the tiles of the neighbouring buildings. The figure of the barn, whose archetype is linked to local heritage, inspired the design of this building: its double-pitched roof and its rust colour revives the age-old links between the terroir and learning, while its long and slender silhouette plays with the laws of declivity to better blend into the landscape. The project’s “breadcrumb trail”is a covered gallery that runs along the nursery courtyard, connecting the entrance of the new installation to the existing school complex. More than a simple passageway, this colonnade space turns into a courtyard during breaks. This arrangement fosters inter-personal uses and interactions.

The construction principle is based on a load-bearing concrete structure, framed using pine battens and insulated from the inside. The structure of the refectory is built with timber frame walls for the facades, while the roof frame is in wood. The Corten steel envelope resonates with the existing tile roofs. This structural system and the materials were chosen here for their rationality, simplicity of lines, and precision of design, whilst respecting a tight budget and environmental lightness. Their implementation for the Lugrin school is a fine example of the work on materials which the agency has adhered to since its first construction projects. To this end, the larch cladding of the versatile equipment of Nevers, completed in 2012, distils a soft and warm atmosphere, the cultural centre of Saint-Germain-lès-Arpajon, completed in 2015, is draped in aluminium, the Cachan theatre, completed in 2018, projects a bas-relief in concrete bricks, and the family centre in Pontoise, completed in 2019, is designed like a monolith in exposed raw concrete. 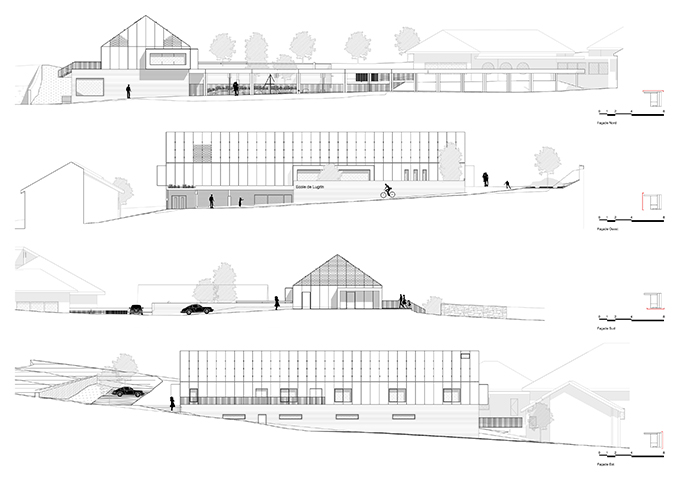 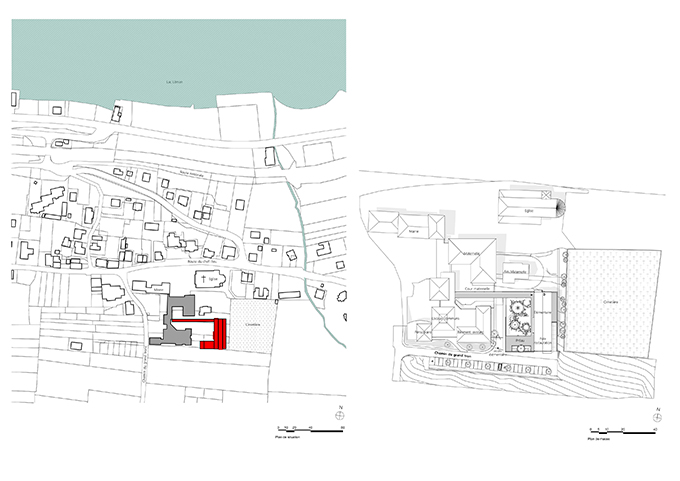 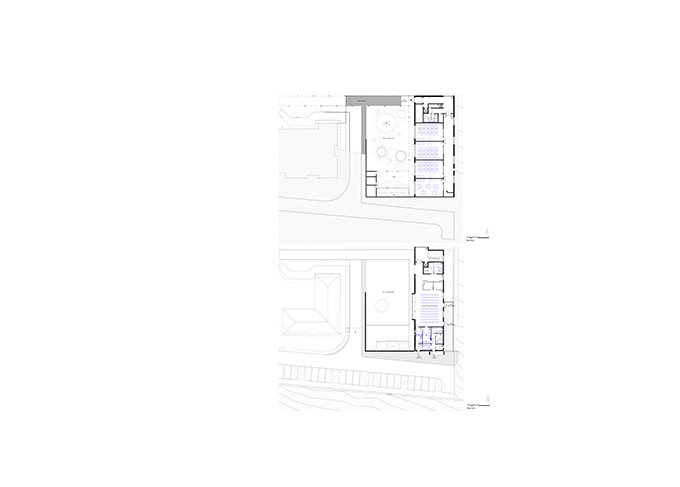 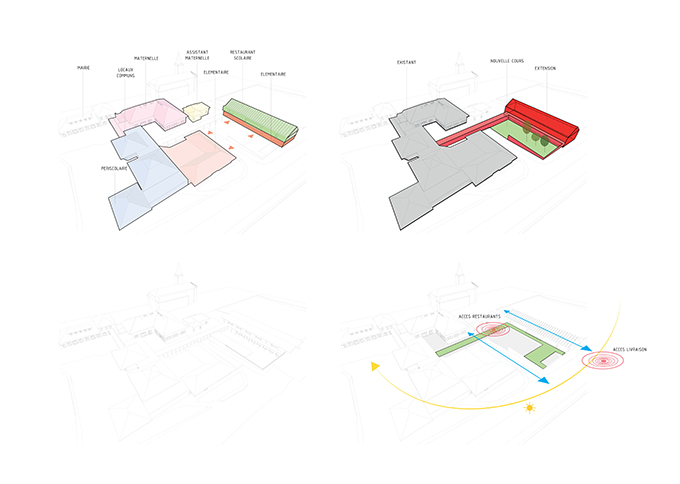 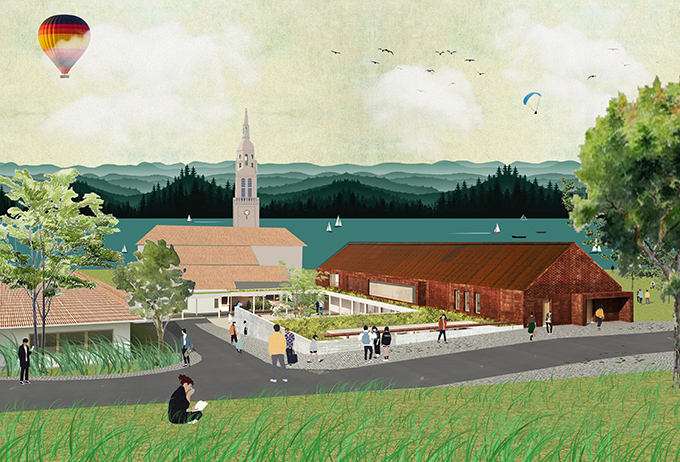 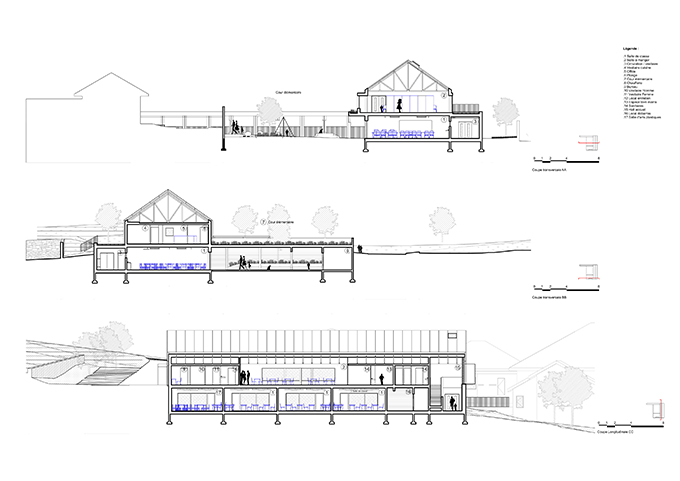 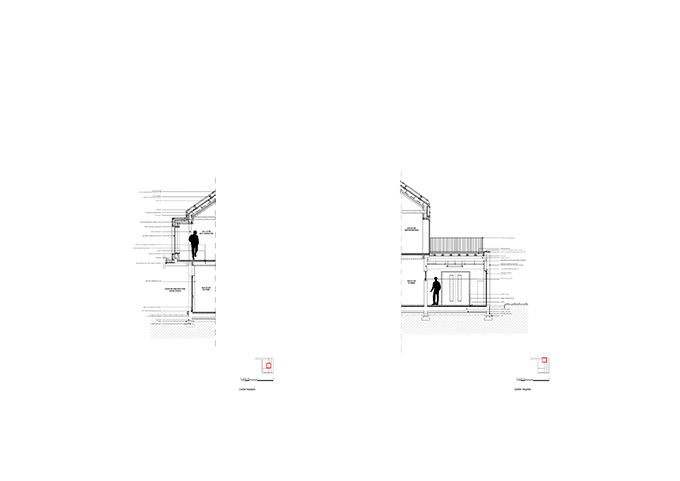 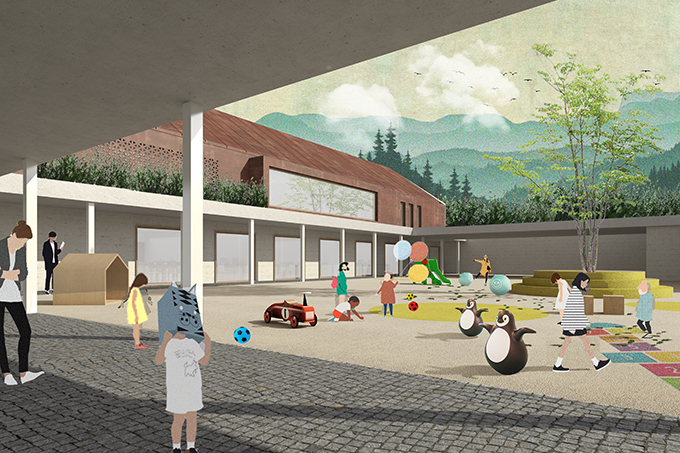 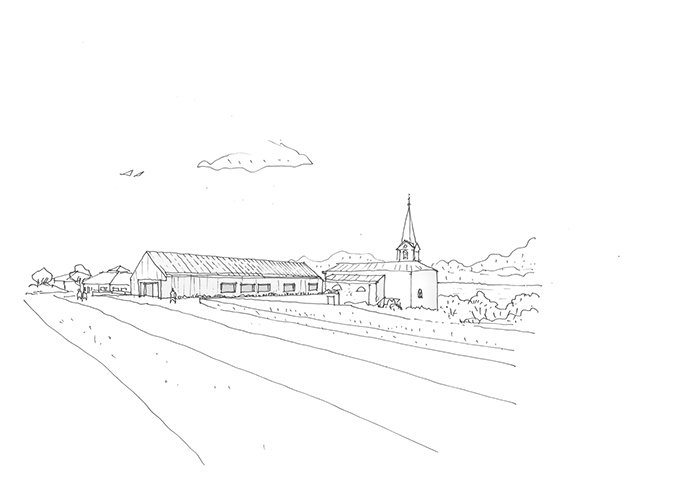 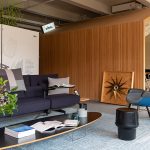 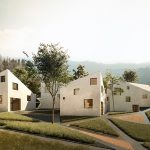