On Friday the 20th of September Henning Larsen Architects was granted two awards at the annual LEAF Award Ceremony for the Harpa – Reykjavik Concert Hall and Conference Centre and Campus Roskilde. Harpa – Reykjavik Concert Hall and Conference Centre and Campus Roskilde both won in the Best Public Building of the Year category. Director and partner Peer Teglgaard Jeppesen attended the ceremony to receive the prizes on behalf of Henning Larsen Architects.

Harpa won the category of Best Public Building of the Year – Culture. About Harpa the jury states: “…this stunning community building both dramatically transforms and revitalises the harbour and brings the city and the harbour closer together […] The project’s consummate sense of Icelandic identity permeates every aspect of the building, which is also an exceptional example of the incorporation of an artist in the team work of a project at a early stage.”

“The judges admired the fulfillment through design of a strongly communal programme […] We also appreciated the fact that the project’s significant green profile for its displaced buildings help to optimise the energy consumption and make the campus adaptable to possible extensions in the future”, the jury report says about the Danish campus.”

Henning Larsen Architects has previously won several LEAF Awards. In 2005, the IT University of Copenhagen won two awards in the categories New Building of the Year and Best Project of the Year. Most recently, in 2010, The Wave in Vejle was selected as Residential Building of the Year. Recently, Harpa – Reykjavik Concert Hall and Conference Centre was also awarded the Mies van der Rohe Award 2013. Emirates Glass LEAF Awards is an international architecture award, which is presented to projects offering an innovative design. The jury consists of some of Europe’s leading architects, who have nominated a total of 52 projects in 16 categories. This year’s 10th Annual Emirates Glass LEAF Awards took place in the Four Seasons Park Lane Hotel in London. 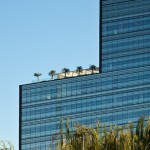 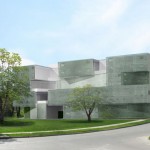