The gentle rotation of the tower, about 13 degrees, not only captures the view of the adjacent city park for an increased number of users, it foremost expresses its obelisk-like, sculptural character signifying the building’s role as a vertical terminus to Guangzhou’s skyline. As a counterpoint to the linear arrangement of the CBD, it embraces the expansive park within a suspenseful relationship and enhances its connection to the heart of the city. Underlining the crystalline form, the tower’s corners are chamfered, with the corner glass surface tapering from the base towards the ‘waistline’ and then widening towards the top. At the base, this leads to the illusion of a tapering volume while the façade in fact is strictly vertical, in contrast to the façades upper portions, which are angled less than 1 degree. These subtle moves, together with the addition of the subtracted volumes on top, generate a slender and elegant proportion of the 61 storey high rise, and reduce the impact on the neighboring residential buildings’ views.

A 24-meter tall podium building complementing the tower adds human scale to the plaza and balances the overall composition of volumes. The podium building’s widely cantilevering shape acts as a majestic gate under which the visitors pass as they enter the plaza, making a visual connection to the park. The landscape design includes an expansive pool which extends the tower’s shape to appear continuing under the surface while providing a cool micro climate for the plaza. The tower is divided horizontally into two zones. The upper part accommodates the Headquarter offices of Guangfa Securities, while the lower portion offers first class tenant space for companies in the financial industry. The tower core, designed for maximum flexibility and efficiency, employs a cross corridor which offers a wide variety of layouts for circulation and program. The headquarter offices are served by a sky lobby, which is conveniently accessible through a sophisticated vertical circulation strategy. This concept ensures a high level of floor plan efficiency as it allows for stacking elevator groups on top of each other in the same shafts, thus reducing the size of the core significantly. Additionally, the core is cut back in the upper third as one elevator group is discontinued, thereby compensating for the loss of area usually associated with tapered building shapes. The two vertical zones are expressed by repeating the motif of a tapering base at the particular bottom of each portion. In the upper part, the recess appears to be carved out behind a transparent skin, generating the impression of a building inside the building. An internal façade covering the divergent base includes a media skin and defines a four storey high atrium space in the sky lobby. The unitized façade system combines several measures for saving and generating energy in a functionally and aesthetically integrated approach. Low-E insulated glazing and a vertical sun shading system minimize heat radiation input while a gradient pattern of horizontal lines consisting of solar active layers on the glazing not only blocks suns direct radiation but simultaneously transforms it into electric energy. Solar cells are equally incorporated in the glazed spandrels which form the bottom of each façade unit and cover the elevations of the technical levels. Their tilted shape improves the efficiency of energy extraction significantly and facilitates decentralized natural ventilation. The façade’s overall appearance gives the impression of a membrane being tautly stretched between the slender corner columns. In an expressive sensual manner, particular parts of the building are pronounced by sculptural forms emerging from the fins. At the sky lobby, the fins move along the inner façade to emphasize the repetition of the tapering base as well as forming a contrasting arc shape to the expression at the top levels. There, the fins gradually change form and emerge as braced supports to carry the curved glass covering the sky club. The repetitive arc theme offers homage to traditional forms of Chinese architecture. With the retreating movement of the facade at the entrance level an inviting gesture for visitors and tenants is given, while the opposite shape of the canopy provides shelter from the elements. 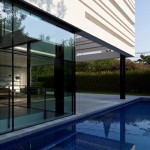 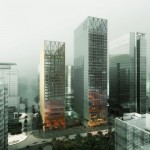