Great news for the Schmidt Hammer Lassen Architects. Lassen's Architects who won the competition to design the Correctional Facility Ny Anstalt in Nuuk, the capital of Greenland. More images and architects’ description after the break. As part of a Danish design team, schmidt hammer lassen architects has won the competition to design the correctional facility Ny Anstalt in Nuuk, the capital of Greenland. The winning design for the 8,000 square metre facility was submitted by a team including Rambøll as full service contractor, architects Friis & Moltke and landscape architects Møller & Grønborg. Ny Anstalt is the first such facility in Greenland. The contrast between beauty and roughness is a guiding theme for the project. Openness, light, views, security and flexibility are the leading values behind the design. “We have designed a project which incorporates the contrast between the rough and the beautiful. Our project matches the unique and beautiful surroundings and supports the focus of the Danish Prison and Probation Service on the balance between punishment and rehabilitation. The whole idea behind the project is to add qualities to the complex that will enhance rehabilitation and diminish physical and psychological violence,” explained Morten Schmidt, Founding Partner at schmidt hammer lassen architects. The belief that the physical surroundings have an important impact on human behaviour and the will to collaborate has motivated the client to initiate a project of high architectural quality. Moreover, the competition aimed at creating a good working environment for the employees. The winning proposal consists of five residential units with rooms for 76 inmates, in both a ‘closed’ and an ‘open’ section. The project also includes work and leisure facilities as well as spaces for visitors to the inmates. In addition, there is an administration division and various technical and security installations. “Architecturally the facility is composed of accurately shaped blocks, which in their positioning follow the natural contours of the rocky landscape. In our appreciation of the lines and character of the landscape, we create a project which in orientation and scale appears subordinate to its surroundings. We make a place with an identity – a small, well-defined area in a magnificent and vast natural setting,” stated Morten Schmidt. The design of the residential units offers an experience of the changing daylight and the surroundings. The contrasts of nature – snow, ice, rocks, moss, blue sky, sun, night, day, birds and other animals – are brought into the complex by the way the buildings are arranged in relation to each other. Thus, a panoramic window in the common lounge area carries nature into each residential unit, and the inmates have an unrestricted view towards the landscape from the windows in their cells. schmidt hammer lassen architects has experience with projects in the justice system. For instance, the company has designed the International Criminal Court in The Hague, The Netherlands, which is due for completion in 2015. Moreover, schmidt hammer lassen architects has designed a string of other projects in Greenland, where emphasis has been put on the combination of local cultural heritage and architectural quality, exemplified by Katuaq, the Cultural Centre in Nuuk, which was completed in 1997. 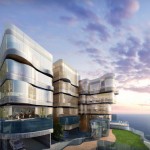 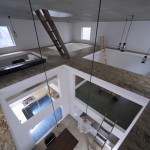