Estudio Montevideo has completed works on Galo Wine Bar in Córdoba, Argentina. The name Galo, which pays respect to the early indications of the technique and production of wine in Galia, comes from the history of a traditional restaurant in the southern part of the city of Cordoba.

After passing through a black metal blind door meant to evoke a sense of secrecy, you will arrive at the reception area, which has a central table made of natural stone with timely lighting and a drink of water waiting for you. All of the first floor’s walls were given a unique texture that was designed by an Italian artist and corresponds to the sense of being inside a mountain.

The organically shaped bar appears to emerge as the focal point and protagonist from these walls as one more stone, crowned by a ceiling made of 433 kiri wood boards of various lengths that form an inverted parabola and visually add weight to it. Kiri wood was chosen for its light tone and light weight. On the other hand, the space is discreetly complemented by the back of the traditional staggered metal bar.

The area supporting these intentions is completed by a wooden floor and a black ceiling. We used a vaulted ceiling on the upper floor, where the majority of the seating areas are, and added lighting to the low places to enhance the effect.

Since a second phase of the project has not yet been completed, the majority of the furniture is still the original. The idea was to create distinct areas for each type of user, such as a more traditional box area, a section with high tables for a couple sharing a drink, and a continuous armchair that could be used for a sommelier’s talk or a tasting. These areas would be surrounded by numerous natural plants that would visually blend in with the treetops visible through the glass windows.

The façade is covered in a succession of arches that create highly personal areas of permanence. The highest arch highlights the primary entrance to the entire experience. 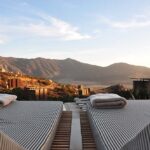 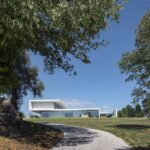