Amarin Apartment Village is work of 3LHD practice which they generously shared with us. Village is located north of the city of Rovinj, surrounded by lush vegetation. Next to the existing 272 apartments, the old substandard ones were removed from the site and 190 new were built in their place. For more images and architects description continue after the jump: Amarin Apartment Village is located north of the city of Rovinj, surrounded by lush vegetation. Next to the existing 272 apartments, the old substandard ones were removed from the site and 190 new were built in their place. The new buildings location is partly determined by the existing pedestrian paths that continue into the new project; and by the plots gentle slope from north to south. The Village was conceived to have a high quality intimate outdoor space that accompanies each apartment as well as a comfortable interior. The establishment of new communication corridors formed irregular particles on the plot, apartment units were grouped on these green islands. The basic modular element – the accommodation unit – is multiplied and grouped into blocks by spatial variations and rotations. The blocks differ from one another in the color scheme of the materials the building facades are treated with. The apartment units are brought into a spatial correlation by formation of voids and atria between them. In this way, micro sceneries and intimate living spaces were created. Outdoor spaces at the Village are graded from intimate – atria, semi-public – the neighborhood, to the public – paths through the village. Design theme was to develop a distinctive architectural language through which objects are related and their affiliation to a block is determined. Consequently, a concept of „unit privacy“ was developed by creating smaller or larger strokes of micro sceneries. The tools for the development of this concept were: the volume design (loggia, atrium, garden, terrace) and the choice of the materials (rough plaster, ceramics, wood, pergolas, vegetation). They were used to form a distinctive color scheme used in the building architecture. Amarin is entirely pedestrian, no cars are allowed on the site, and car parking is provided on the edge of the site. The main walking paths through the Apartment Village are between blocks, from where trails lead to the entrance of each apartment. All trails and paths are formed freely in relation to the natural slope of the terrain at the site. The rooftops follow the slope and have a final layer of coarse crushed stone; facades are finished in white plaster and ceramics in the colors of individual blocks. Outdoor terraces are made from wood, with wooden pergolas and privacy is insured by a green wall of plants that grows supported by the terrace construction. The Apartments visual identity and signage and environmental graphics were developed by Lana Cavar and Luka Predragović. As part of the visual identity, Croatian illustrator OKO made the illustrations applied in the interior of the apartments and on the signage. The inspiration for the identity and the illustrations were traditional Istrian costumes and animals specific for Istria: Istrian ox „boškarin“ (Ciprijan), Istrian sheep (Barbara), Istrian donkey (Pepi), redheaded grebe (Vanda), and bee (Keko). The apartments are furnished with „Revolve“ sofa beds by a Croatian manufacturer Kvadra, designed by Numen/ForUse + Bratović&Borovnjak, and ILI_ILI lamps designed by Grupa. The concept of the lighting for Amarin immediately follows the color scheme of the whole Apartments – combinations of lamp shades were put together with the idea of recognition of individual blocks. 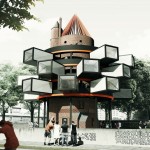 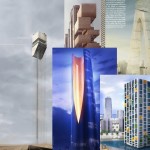