For more of their project continue after the jump:

The proposal for Hotel Liesma, by Visual Workshop  architects Nils Saprovskis, Mārtiņš Rikards, Valters Bruzgulis, Edīte Bokāne, is designed for a music-themed upscale Hotel Competition in Jurmala, Latvia with the concept taken from the strongest powers. „When the sea meets the earth” – we see the power of nature, it can destroy or it can bring the life. The aim of the project is to make a new landmark of the surrounding neighborhood as a contemporary, sustainable and functional hotel. The project has to determine new identity and extra value to the existing hotel building. So we attach a new dimension to existing concrete grid structure, which is wrapped with two organic wings – water and earth, covering the building functions on the longitudinal axis. Curved elements are articulating building functions – EARTH – entrance; SEA – hotel activities, conference and music.  Vertical communication is located between these two curved elements articulating the backbone of the building. Main car and pedestrian access to the hotel is from Dubultu prospekts. As this is a one way street, the traffic flow is organized as well from East to West, making a logical order to perceive a hotel building and a functional way to drive in and serve the building. Sequentially entry from Dubultu prospekts, taxi stop, guest arrivals, bus stop, guest parking and exit to Salacas street. The walkways are designed organically to follow main pedestrian flows, as well as making continuity of the concept. The building itself devides guest flows along Dubultu prospects and on the West side towards the beach and staff parking and entrance on the North East side. West side is as an open garden facing hotels public functions – restaurant, conference rooms, and entrance lobby. The garden draws in the green spaces from dune area towards the hotel, making pass to the beach. Spaces for recreation, walks, children playground, and possibility to make a little outside concert stage are situated there as well. Valuable trees are preserved and supplemented with new plantations.

We have organized the East part along Gaujas street as a free planed forest. The curtain for family rooms and staff courtyard. The South-East side is an entrance plaza. Potential future expansion of the hotel can be made on the North East side of the plot by complementing existing family room volume in the same architectural language by making approximately 40-50 new rooms in 4 floors. The whole building is divided into 3 parts. First – existing volume split with the main vertical communication, embodying all guest rooms except family rooms which are situated in the second volume towards the Gaujas street and in the future can be expanded to the north.

The third volume is a new space for restaurant, kitchens, staff rooms on the first floor and conference zone on the second, thus making funcitonal connection between them. Sustainability is very important aspect in hotel planning, because it significantly reduces operating expenses, increases cash flow, reduces carbon-footprint and environmental compliance, but, most importantly, welcomes guests in the hotel with added value. 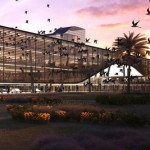 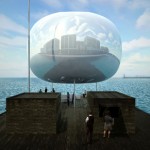