The Tianjin West Railway Station, which is located about 130 kilometers south-west of Beijing, serves as a stop on the high-speed line between the Chinese capital and Shanghai, as well as connecting the various regional lines and linking these to the underground network. The local urban design function of the railway station is to connect a commercial area to the north with the old city center to the south, bridging tracks, a river and a road in this city of 12 million residents.

The architects have highlighted the bridge function between the city quarters with a 57 meter high and nearly 400 meter long barrel vault roof above the terminal concourse. Its curved roof is reminiscent of a large scale city gate and the long, stretched out concourse beneath of a classic place of transit. The portals of the eastern and western sides of the curved hall are symmetrically framed by arcades. To the south of the building a large and
open station forecourt covers a wide area which gives credence to the importance and dimension of this railway station.

Passengers enter the new Tianjin West Railway Station through the main entrances on the northand south sides. Arched cantilevers above the entrances and tall window fronts convey an initial impression of the space passengers encounter in the concourse, which is flooded with daylight, providing a highquality atmosphere and clear orientation for travellers. Daylight reaches the concourse through the diamondshaped steel and glass roof construction, and while the lower part is nearly transparent and admits a great deal of light, the upper part serves as protection against direct solar radiation. The barrel vault roof conveys a dynamic impression, not least because its steel elements vary in width and depth from the bottom to the top, and are woven together. Escalators and lifts are available for passengers and visitors to descend to the platforms. This technically and structurally sustainable railway station illustrates a contemporary interpretation of the cathedrals of traffic from the heydays of railway travel. 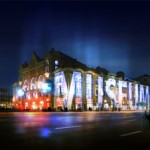 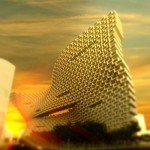