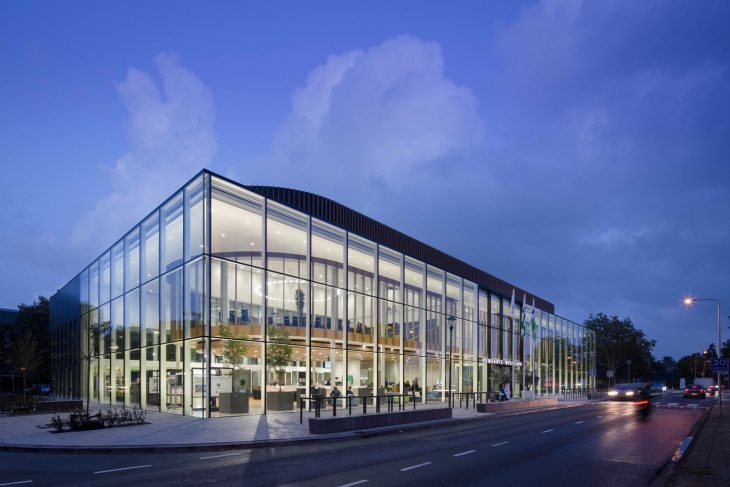 On Wednesday September 27, the new Westland town hall and municipality office were opened in Naaldwijk. The opening included an official ribbon cutting ceremony by mayor Sjaak van der Tak, alderman Bram Meijer, Volker Wessels CEO Dik Wessels and Volker Wessels director Piet van der Hoeven. The town hall functions as a center for the council as well as for public services and ceremonial gatherings. It is situated at the Verdilaan. The new municipality office houses the majority of the municipal staff and is located at the Laan van de Glazen Stad (Lane of the Glass City). The new edifices were jointly realized within the framework of a Design Build Finance Maintain and Operate-assignment that was granted to the Groene Schakel (Green Link) consortium, which consists of Boele en Van Eesteren, Homij Technische Installaties, the PHC Dienstengroep and Kondor Wessels Projecten. The architecture and interior were designed by cepezed and cepezedinterior. 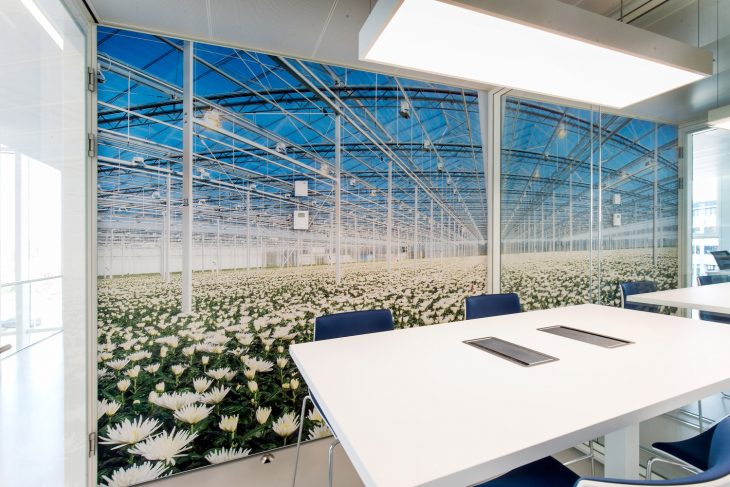 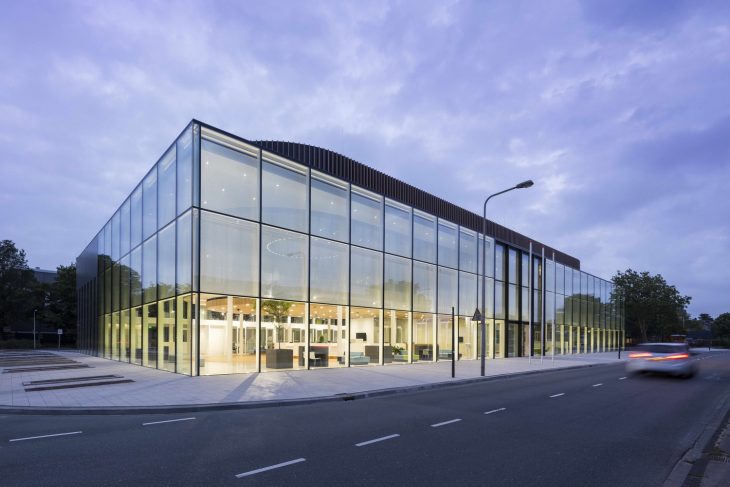 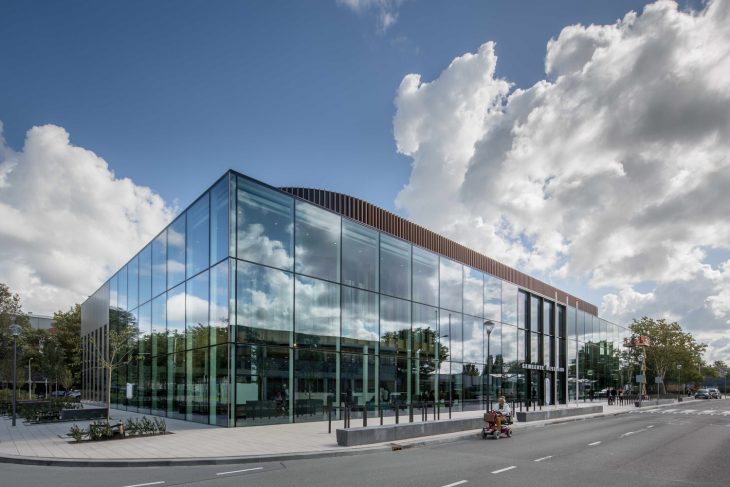 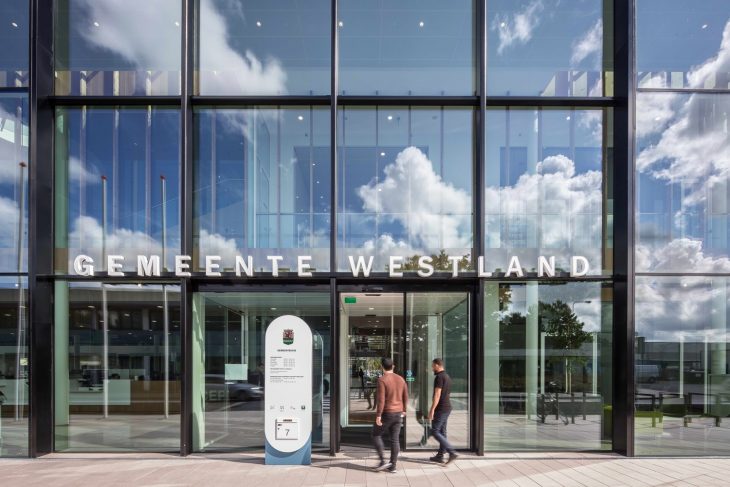 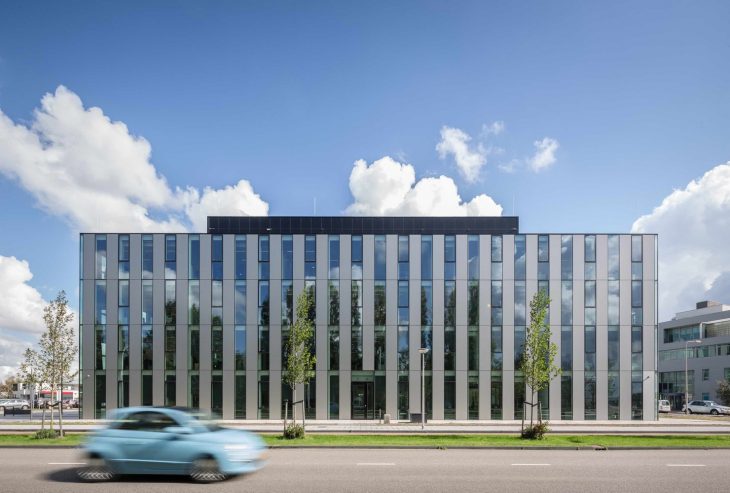 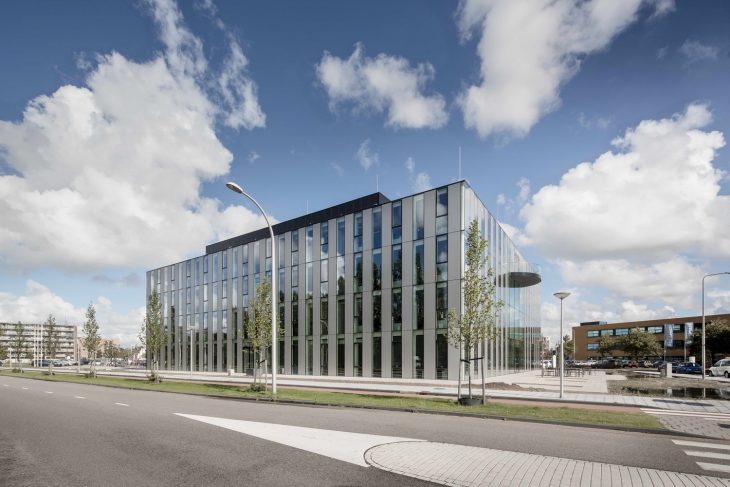 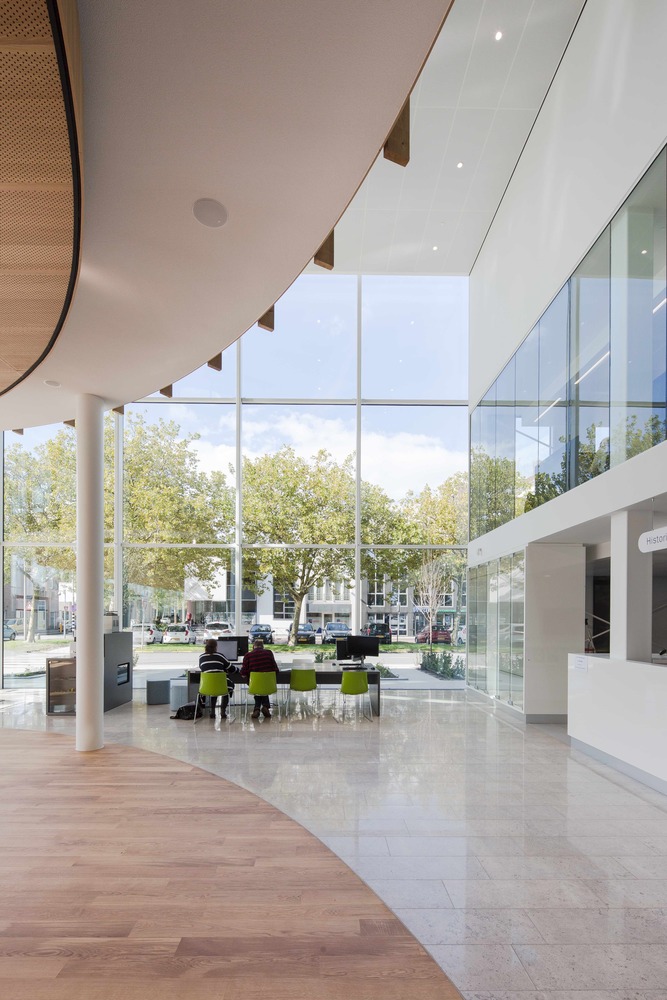 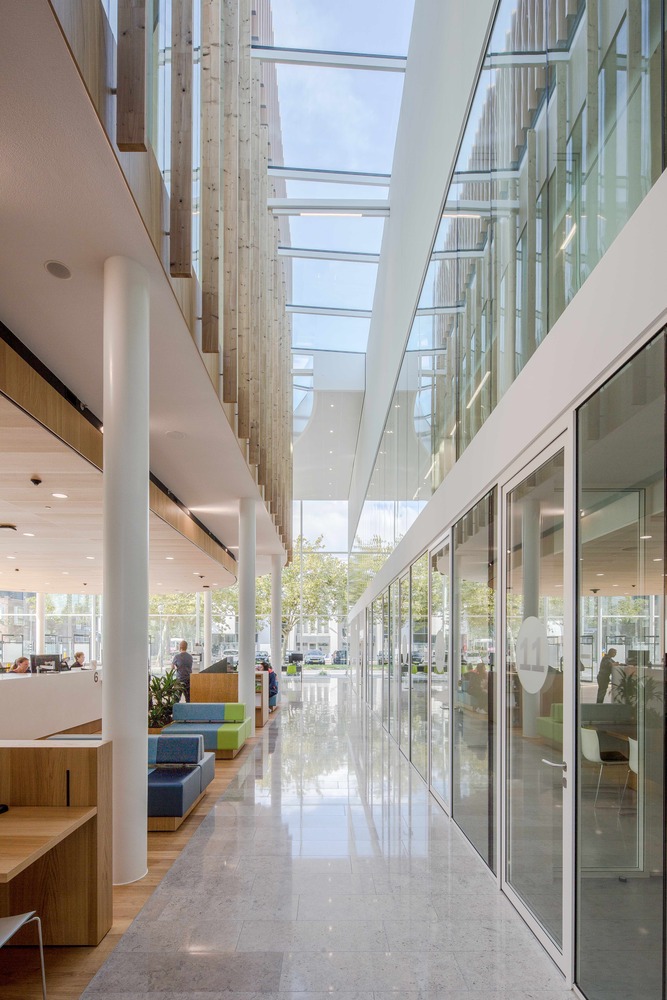 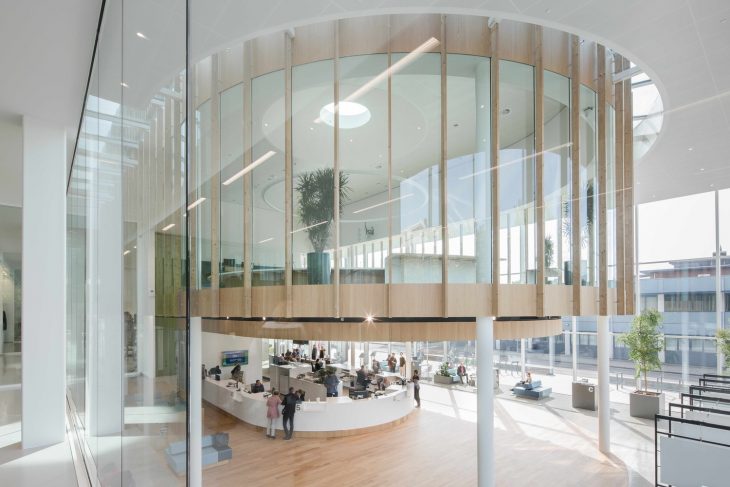 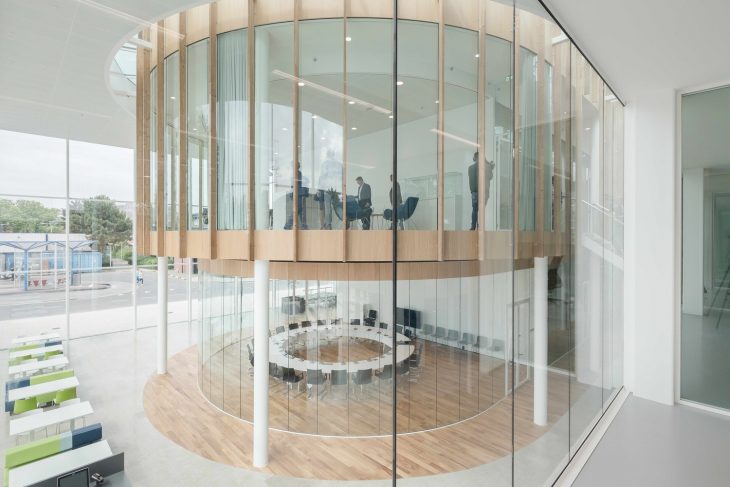 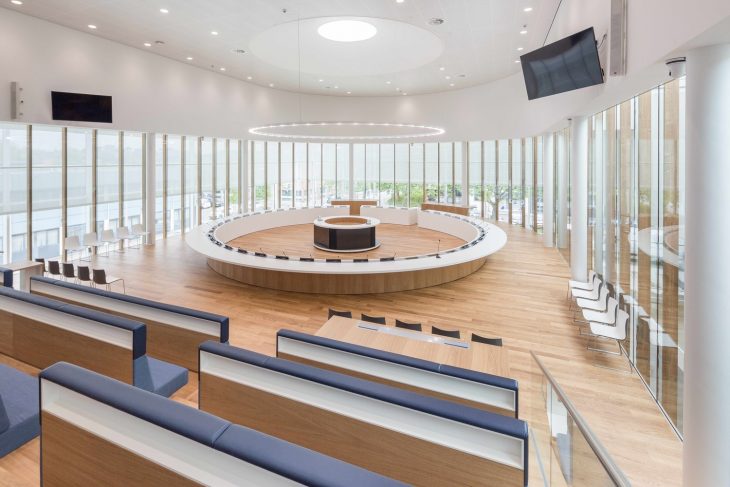 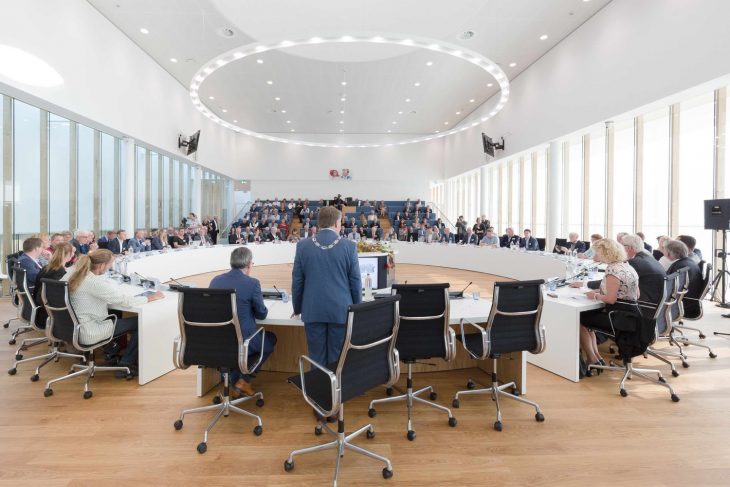 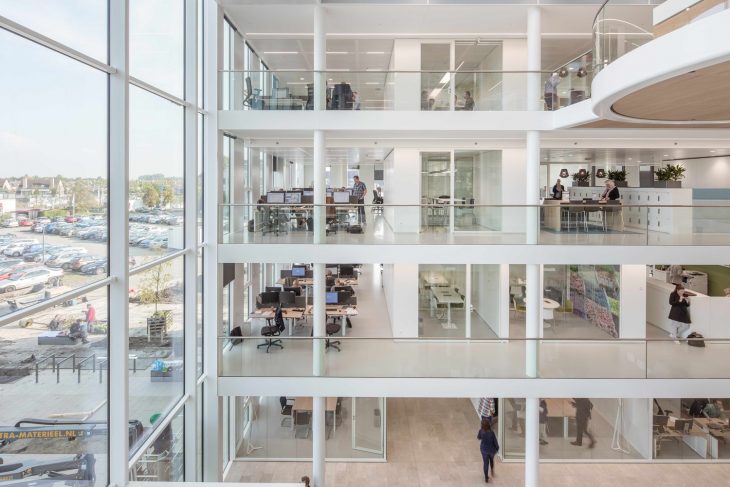 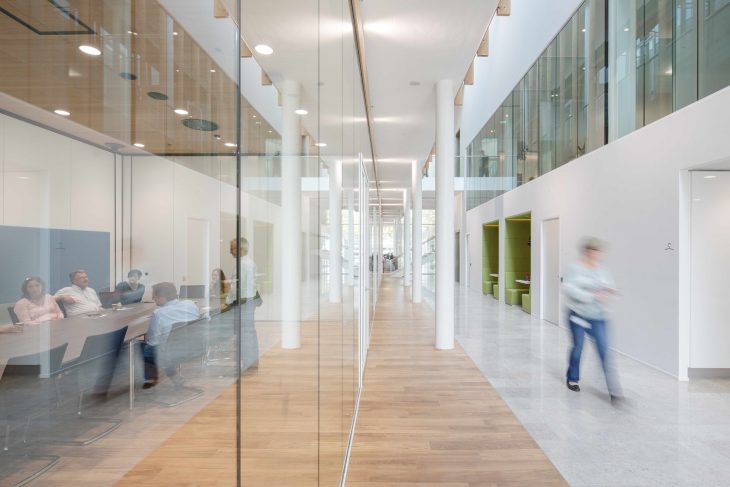 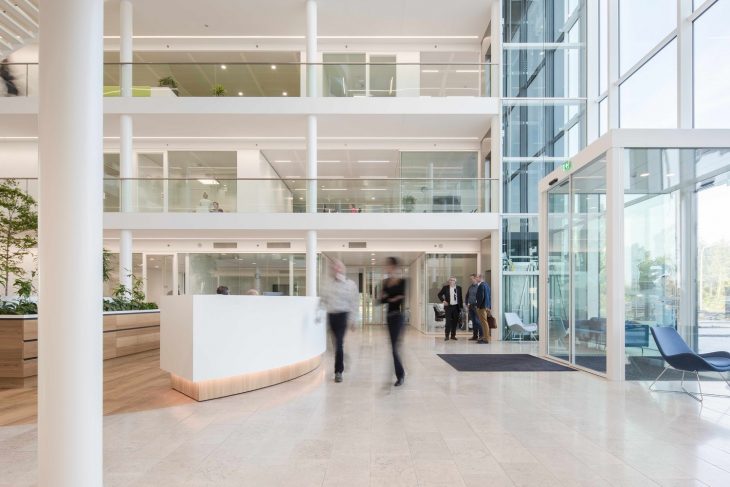 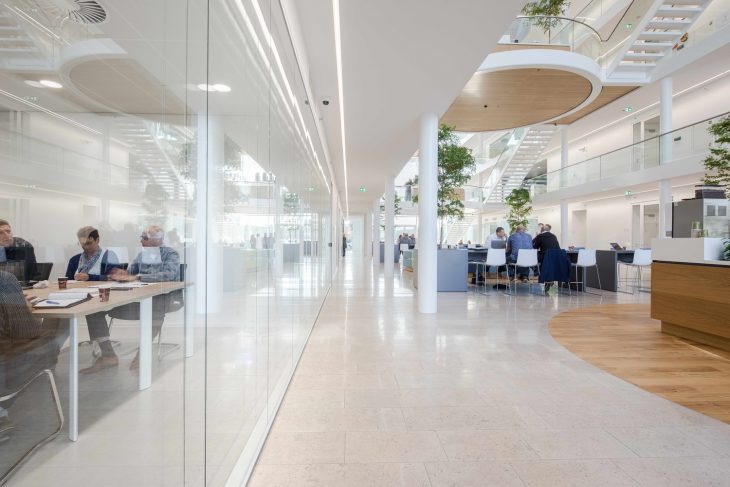 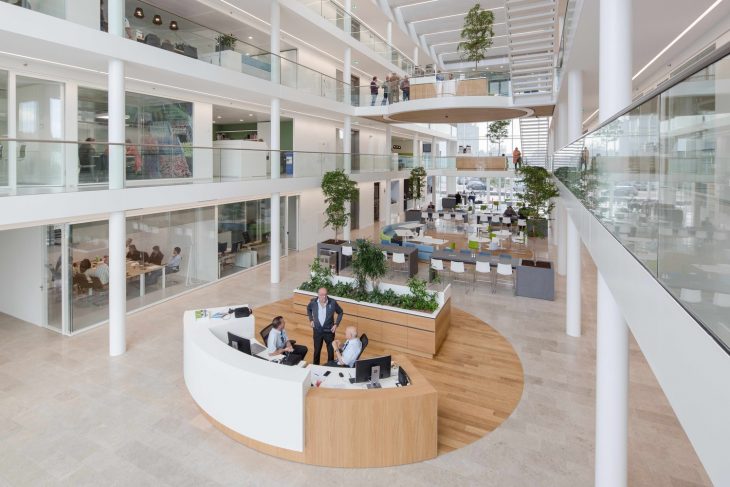 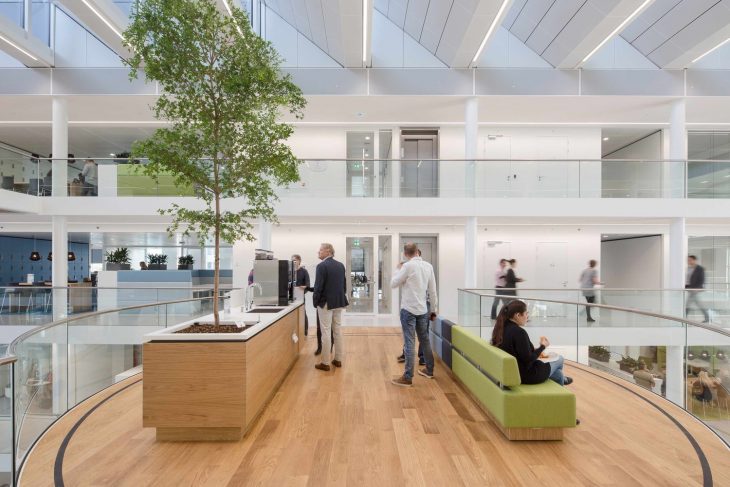 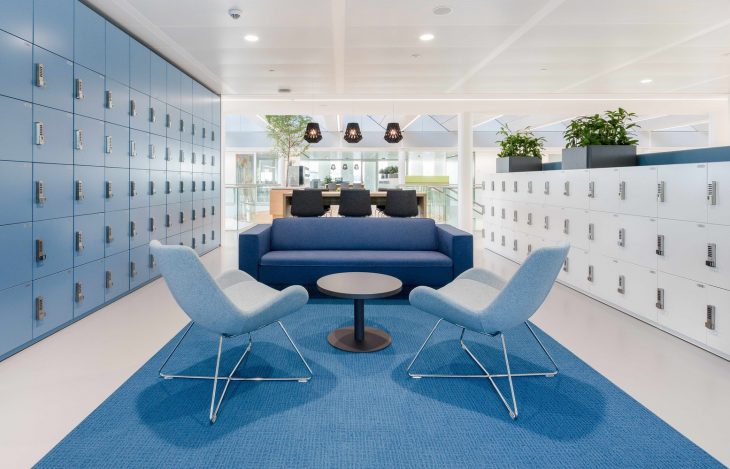 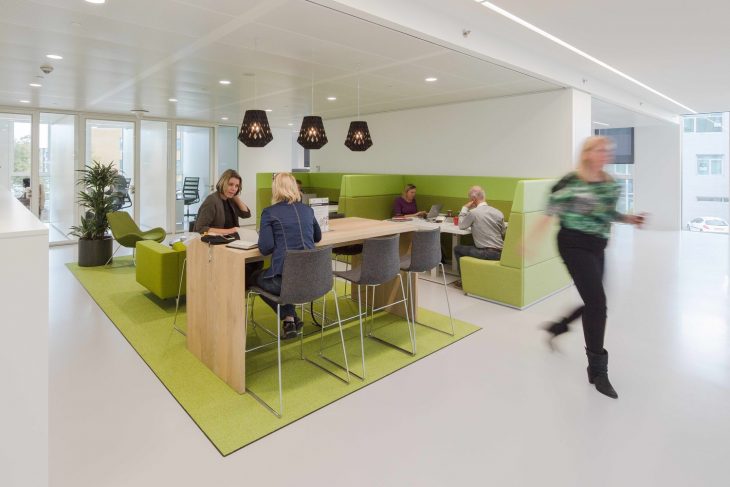 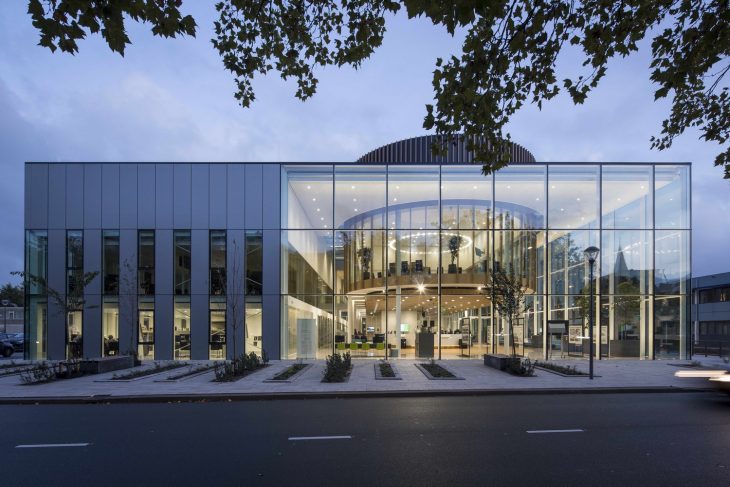 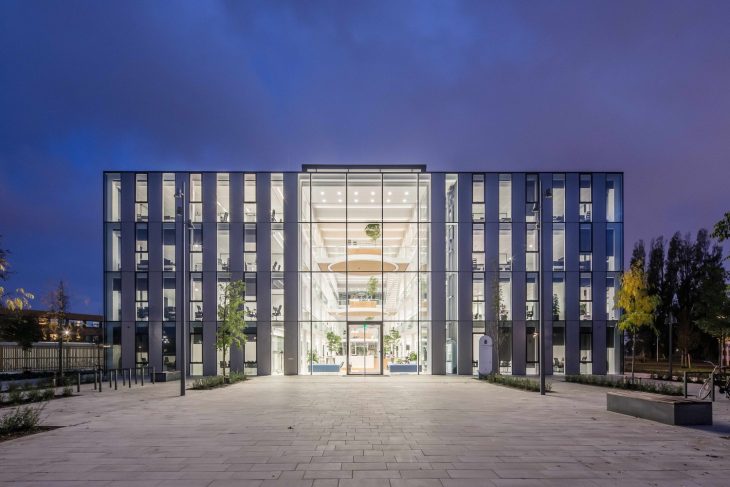 The buildings were conceived with a focus on a variety of theme’s, such as representativeness, spatial quality, functionality, flexibility, comfort and sustainability. On both locations, the architecture is based on the metaphor of a green house. After all, the green house is an omnipresent element in the urban, cultural and economic aspects of the Westland municipality. Within the context of the green house metaphor, the façade is the covering of everything that lives and grows inside; a thin shell enabling internal processes to proceed swiftly and smoothly. The new town hall is a place with optimal transparency. This adds to the building’s experience as well as to the staff’s and visitor’s well-being, but it also underlines the democratic character of the town hall; there is a strong visual connection between the inside and outside, between the government and the civilians. Also characteristic of both the green house and the new town hall and government office is the repetition in the rhythmic of the façades. On both locations, this renders a pleasant and quiet streetscape. All color is on the inside.

The town hall and municipality office were designed such that all logistic movements proceed naturally and intuitively without mutual hindrance. Both buildings have a high degree of flexibility, among other things because of the large, almost column-free floor fields that are easily rearrangeable according to any way of use or interior concept. The installation techniques are fully aligned to this spatial flexibility; for instance by means of the application of climate ceilings, the buildings remain climatologically comfortable throughout, regardless of the type of use or interior arrangement. No matter the arrangement, it is also always easy to connect to the variety of installation-technical facilities such as AC and ICT outlets.

The buildings are CO2-neutral. The use of energy is strongly reduced by means of a variety of modern-day techniques and materials such as triple glazing, LED-lighting and the control of lighting and ventilation based on (the degree) of human presence. The energy nonetheless needed is largely derived sustainably through over 1.120 m2 of partly thermal pv-panels with a joint revenue of 115.000 kWh per year. Phase Change Materials function as a thermal buffer storage.

Open staircases are prominently positioned, stimulating their own use and with that a healthy use of the building. Daylight gets through everywhere and is omnipresent. The materials are robust, need little maintenance and were produced sustainably.

Sustainability was also achieved through the method of industrial, flexible and demountable (IFD) construction, which rendered the realization highly efficient and made for a minimum of materials and waste. A flexible use and optimal possibilities for the re-use and recycling of elements are also key within the method.

The centre for the council and public services at the Verdilaan has the character of a ‘house of the community’. It is an open and accessible building with a representative appearance that offers space for the council, the public services and the Westland society. It is the location where the Mayor and Aldermen fulfil their duties, where democracy is visibly in action and where ceremonial happenings take place. It is also a location that offers room for initiatives, gatherings and events.

Fitting in with the urban scheme, the building basically consists of a long rectangular volume. At its backside, a generic bay of three storeys contains the public consulting rooms, the restaurant kitchen, offices and the historic archive with accompanying reading room.

In front of this generic bay lies a large, transparent and inviting atrium. One side of its ground floor level holds the public entrance area; the representative reception area and restaurant are situated on the opposite side. In the middle of the atrium, the council functions are housed in a spacious ‘furniture-like’ construction. This has had rounded ends, extra high ceilings and a skin of glass and wooden slats. The lower level contains the shared functions of the the administrative apparatus like the committee rooms and the conference center. The upper level comprises among others the council hall, the room for the Mayor and Aldermen and the party chambers.

The transparent atrium façade offers passers-by a direct view on the administrative functions, while the wooden slats nevertheless make for a sense of demarcation as well as lend the administrative furniture-piece a special appearance and dignity. The high degree of insight and transparency is inviting and the light and warm appearance accommodates an agreeable working environment. The layout of the different services is logical, natural and clear. The boardroom is sizable and many rooms are multifunctional. Movable wall panels grant maximum flexibility and adaptability. During the day, the committee rooms can be used as meeting rooms. When the flexible walls are fully opened, a large open space for press conferences, parties, weddings, exhibitions and large gatherings comes into being.

The materialization is typically Westland-related: elements like plant beds in the surrounding area, as well as the use of glass and wood, refer to the glass city’s greenhouses. The furniture is upholstered in the colours of the Westland’s municipal logo. The atmosphere is open and intimate at the same time. Visitors feel welcome, also due to the hospitality of the staff. Along the Verdilaan, the building is in full interaction with its environment. Among other things due to its transparency and location in the heart of Naaldwijk, but also because of the integration of the municipal archive, the public and administrative center is the place where the Westland past and present meet.

The exterior of the municipal office at the Laan van de Glazen Stad has a matter-of-fact appearance; the interior is spacious, inviting and representative. The building consists of two generic office bays with a high, luminous and green atrium in between them. Among others things, the atrium comprises the reception and restaurant. It has a strong visual relation with the entrance square.

The large open space of the atrium holds several ‘islands’ that seem to float freely in space. They are connected to the office floors by means of walkways. The islands are fitted with seats and coffee pantries; it is here where employees discuss the weekend or, for example, eat cake on a birthday. Thus, the islands not only significantly contribute to spatial diversity, but also play a key role in stimulating meetings, interaction and social cohesion. Also, they are part of the traffic routes between the two office bays, which can be arranged freely.

The municipal office offers a contemporary working environment with different types of workplaces and many options for meeting and sharing knowledge. The ground floor houses general functions like the project, meeting and instruction rooms, as well as the dispatch and technical areas. The upper floors are arranged with different types of workplaces in open, semi-open and more confined areas in a gradual scale ranging from bustle through murmur and peace & quiet. The quieter, more private areas are situated along the façades; the areas for meeting and cooperation are positioned along the lively atrium. The informal living rooms with both high and low tables and chairs connect directly to the meeting islands. At the building’s end, the upper floor holds a special brainstorm lounge connected to an outdoor balcony.

The municipal office has an overall appearance that is both professional and attractive. As in the public and administrative center, the colors used for the interior elements stem from the colors in the Westland logo. As an identity-enhancing element, wall-wide photo prints with typical scenes from the Westland life are used in a variety of spaces.