Hangar Design Group have fully modernised this Peggy Guggenheim Café at Palazzo Venier dei Leoni, Venice which they generously shared with us. For more images and architects description continue after the jump: On June 4 the new Peggy Guggenheim Café was inaugurated at Palazzo Venier dei Leoni in Venice: a redesign project inserted in a unique museum context such as Peggy Guggenheim’s home.

The history of Palazzo Venier dei Leoni, the extraordinary unfinished 18th century building overlooking Canal Grande in Venice, is interwoven with the history of 20th century art. From 1948 to 1979 it was the home of the great collector Peggy Guggenheim, who welcomed artists, collectors and art lovers. In 1980, a year after her death, the building was transformed into one of the most precious museums dedicated to 20th century art. Working in such a stratified architectural context, full of historic and artistic references, requires entering on your tiptoes. Therefore, the museum café renovation project, designed by Hangar Design Group, started from the need to reorganize the museum layout that leads the visitor to the café. A design premise based on the in-depth study of a benchmark and the need to harmoniously join retail and museum functions, considering the particular location of the space in the building. Inside Palazzo Venier dei Leoni, the Peggy Guggenheim Café is situated on the veranda facing the internal garden – the green heart of the building – and in front of the museum wing dedicated to temporary exhibits. An obligatory passage, perfectly integrated with what still remains of the coziest and most intimate museum wing, also in terms of volumes.

Reorganizing the space revolves around the dual purpose of, on one hand, emphasizing access to the temporary exhibits through a more rational layout and a portal housing a digital poster, which is also visible from the outside, and on the other, making the space leading to the café and adjacent bookshop more fluid.

This is how a new zoning was redefined, according to the different uses of the space, from a fast lunch at the long counter overlooking the garden to a private lunch in a more concealed space, to a relaxing break in the more intimate room inside. The transition to the exhibition area was highlighted by a large white portal that is inserted in the 18th century architecture, underlining its proportions and articulating the space. Subsequently, the furnishing was chosen. The formal leit motif is the stylistic essentialness that characterizes the interior design. The minimal counter, custom designed by Arclinea to combine functional efficiency and formal rigor, stands out in the bar area. Tables and chairs, by Desalto, meet the same criterion of light elegance, almost vanishing away. Square shapes were favored to optimize the modularity of the private areas, while round tables elegantly furnish the tearoom, the coziest part of the internal area.

The color scheme consisting of white for the walls, with travertine marble and Istrian stone inserts, or yet again for the furniture, is essential to the choice of exploiting natural light as an element of continuity with the open space of the sculpture garden, an integral part of the exhibition space. The sole concession of color is dark green on the window frames, which introduce the greenery of the outdoor space.

Lighting the space is the “Peggy” light installation, a lamp specifically designed for this space by Hangar Design Group and made by Vistosi. With shapes and black and white inspired by modernism, “Peggy” evokes the spirit of Calder’s mobiles, incorporating the levity and lightness of a rational and elegant mark.

On the walls, large black and white portraits of Peggy show the great collector in her home, commemorating her artistic heritage and giving visitors an unmistakable image of the star of the 20th century. An identity-making memory and iconographic call, also highly visible from the garden across the veranda, the image of Peggy invites the visitor to enter and linger in her rooms. 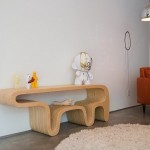 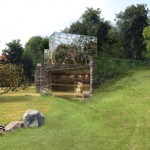