A temporary Pop-up shop for an independent clothing brand Zuo corp. was planned initially for the gardens of the Warsaw University Library during the summer. The building of the project however was postponed to the winter and relocated to the city center, opposite the popular Warsaw café 'Między Namiʼ address Bracka 20. Zuo Corp. Pop-up shop opened on the 18th of December and was open for a limited time of just 3 months.

The designers were given the use of a small sidewalk space, which would normally be allocated to café 'Między Namiʼ in the summer as a garden café. A major requirement for the project was to use two interconnected office containers (dimensions 4.65 x 5.60 x 2.31m) that the investor had at their disposal. The metal insulated structure of the container was supposed to provide protection from the difficult weather conditions: heavy rain, snow and strong frosts (up to -20 ° C) occurring at this time of the year in Warsaw. The aim was to achieve maximum effect with minimum means, having a small budget and the use of the base structure of the containers. Another important task was to create a surprise effect when entering the pop-up shop. Small, inconspicuous object, as it seemed from the outside, was creating an "Alice in Wonderland" effect, to introduce the viewer to another world. The outer facade of the black cube did not announce what happened inside the pavilion. The containers were tightly "packed" in black canvas evoking an association with a magic box of a prestidigitator.

A space of 27 square meters was divided in 3 different functions: a main exhibition room with dimensions of 4.5 x 4.5 m, and a small facilities area with storage and dressing room. The ceiling height of the space was very low, only 2.2 meters. To avoid the impression of being in a confined space, we decided to visually enlarge the main room to infinity by lining the walls and ceiling with mirrors. The floor was covered with black linoleum. The doors to the back and into the dressing room were also hidden behind mirrors. The changing room was lined with black cloth. The customers had to go outside the dressing room to see their own reflection.

All edges of the interior walls were accentuated with stripes of LED lighting. This being the only source of the light to the room combined with the mirrors strongly emphasized the illusion of boundless space. The impression of the space having a low ceiling – gone: The clothing, light, people and floor all reflected in the mirrors to infinity became the only heroes of the interior space. From every angle attention was focused purely on the new styling of the customer. 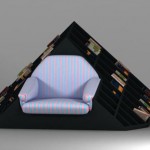 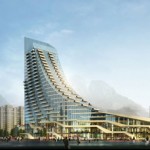