Two permanent bridges are linked by a narrow diagonal span over Carpenters Lock at the centre of the Olympic Park. During the Olympics a central temporary infill between the bridges accommodates the crowds. In the legacy park, two bowls are created on either side of the lock linking the upper park concourse with the lower level of towpaths and waterways. Embedded within the design for F06 is the understanding that the Olympic / Park concourse should be perceived as a ʻcontinuous landscape that seamlessly extends across the various waterways, railways and roads’ forming a primary movement infrastructure surface for the park. Equally important is the connection of the parkʼs two horizontal planes. The concourse upper level, connecting the north and south Olympic park and the ecological lower level made up of the towpaths and waterways. Finally, the design understands that though the duration of the Olympics is short lived, it is this momentum that drives its legacy and the success of the park. Capturing the exuberance of the Olympic games, the surface of the temporary infill deck utilises recycled running shoes to form a multi‒coloured carpet of ‘Confetti’ to celebrate the Olympic moment. 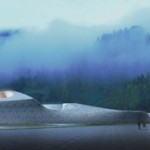 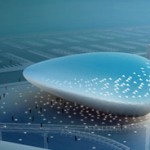