Agraz Arquitectos designed this amazing contemporary two-story residence situated in Guadalajara, Mexico, in 2016. Take a look at the complete story after the jump. This is a very special house, among other things because its main inhabitant, besides the family that lives here is a tree. Before we go any further it is important to observe that the emplacement of this house seems to be at odds with the street. Although seemingly so, it is quite the opposite. In this sense, since it’s longitudinal axis is oriented east-west (perpendicular to the street), and the most favorable orientation for the house in north-south, it was decided that the house accordingly so, should to look inwards rather than outwards. This means that it is not so much at odds with the street, but instead of looking directly at it, the project deals with the street through the creation of an important transition space between both the building and the street, which helps to change the pace while approaching the entrance. Underlying this exterior transitional space, lies the belief in the idea that each project, no matter how small, has a responsibility towards the creation of place in the city.
The decision to orient the house inwards determined its layout. In a broad sense, the main scheme is a very straight forward “L” figure. Its smaller section contains the entrance and family room, while the larger part of the figure, that looks directly towards the garden, hosts the kitchen, dining room, living room and the terrace. In between them, lies the key space that articulates the house both horizontally and vertically, while at the same time, constitutes the house’s main spacial feature. This is the only place in the entire building where we find a double height ceiling. It is so, because it contains a beautiful tree located next to the tallest window in the house. This is precisely the window that communicates, through its lattice, with the garden. Said lattice, designed by the artist Adrian Guerrero, combs the light and brakes it into a myriad of dancing sun rays that set the tone for the house’s particular atmosphere.
Both the light filtering through the artwork and the tree, are meant to be daily reminders of time. As architecture is a witness of space, so the tree is a witness of time. The tree is this house’s partner, it will accompany the family and grow old with them, it will share their lives and their memories. This is why it is a very special house, among other things because its main inhabitant, besides the family that lives here is a tree. 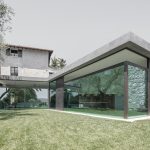 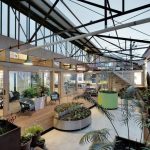