Vitale recently completed works on their new headquarters in the historicist building from 1947 in the center of Castellón, Spain. The new offices rescue the essence of the original construction and provide a new modern look. Take a look at the complete story after the jump.

From the architects: Vitale studio projects its headquarters in a space that dialogues with the past in search of simplicity, authenticity and origins. A project that talks about the way of being and doing of this team of creatives.

The studio is located in the historic center of Castellón, in a historicist building from 1947 built by the versatile Bernat Artola, poet and passionate about the arts, who had his studio in this building. The new Vitale offices rescue the essence of the original construction and provide a new look: functional, open and bright.

With an area of about 80 m2, the space is developed in 3 areas: work, presentations and rest. The starting point is a house that was originally very compartmentalized in which all non-structural elements are eliminated to generate continuity of spaces open to natural light.

In order to rediscover the existing elements (solid brick walls, wooden beams or interior carpentry) the layers of paint and plaster that hid them were removed, but without trying to repair the defects or scars what tell the true space story.

The 3.40 m high traditional vaulted ceilings are restored to make them the main element of the project by means of indirect lighting pits that frame the beams in large geometric figures. The ceilings are only lowered in the bathroom and in the office to hide the air conditioning ducts.

Many perimeter walls bend to improve insulation and facilitate the passage of plumbing, electrical and network installations.

A rehabilitation and reinforcement intervention of the structure is carried out by means of a compression layer with pouring of concrete slab. Much of this concrete is polished to show off the aggregate and leave it as pavement in use.

The entrance area recovers the pre-existing original hydraulic tile with a triangular design (known as a “handkerchief”) placed following a traditional geometric pattern in black and white. A large piece of furniture with a mirrored baseboard seems to levitate on the hydraulic carpet. It is a large 3-sided service container separated from the ceiling that provides spatial continuity, gives way to the work area and hides the printing area.

Technical carpet has been used to increase acoustic and thermal comfort in the work area. It also goes up a wall and serves as a covering for the inclined plane on which Vitale designs the moodboards for his projects. It is the protagonist of a large piece of furniture with auxiliary shelves that contain the studio’s library of materials and catalogs.

In the presentation and meeting area, scales and finishes are played with to achieve an imposing and refined space. It is a space with museum and theatrical aesthetics destined to immerse clients in their project. The room has an enveloping design in which the table and the ceiling are accompanied by a spectacular 17-meter long velvet curtain that hides the corners of the room. The smoked glass sliding door and curtain allow the space to be completely closed to control lighting and acoustics during the screening of presentations.

Behind the arch there is a large decorative carpentry window that has been restored with grooved glass. It gives way to a multifunctional rest area (to have a coffee or receive suppliers) that can be completely opened to the outside as a terrace thanks to a folding glass enclosure. A small office and a toilet complete the distribution of the office.

The result is a project that makes use of the potential of the pre-existing, that recovers its evocative and serene essence with honesty and coherence. An inspiring and vital space. 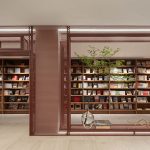 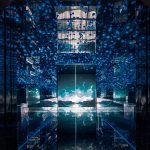