Montreal based architecture firm Microclimat has recently completed works on this stunning private residence in the eastern part of the Rosemont-La-Petite-Patrie neighbourhood. The three-story, 2,500-square-foot home draws many features from suburban structures while also having a small independent studio in the basement. This house elegantly combines several volumes that simply nestle themselves into the surroundings, all while retaining its modern lines. Discover more after the jump.

From the architects: The 2nd Avenue home resides in the eastern part of the Rosemont-La-Petite-Patrie neighbourhood, in Montreal—a working class district where urbanization was marked by the arrival of the Canadian Pacific Railway and many other industries settling here in the twentieth century. In a similar fashion to how the railway has become a gem of a linear playground, this entire neighbourhood now adapts and values its heritage to translate it into an attractive place for Montrealers to live.

At the end of an extended stay spent lounging alongside a suburban poolside, Jean-Yves’ decision was made to return to the city. After getting his hands on one of the rare empty lots in the sector—the old parking lot of an adjacent house—he contacted Microclimat to explore the possibilities that presented themselves for this underused space. Marked by both opportunities and constraints, the architectural exploration aimed to create a convivial and flexible homestay with a design that would also defy the passing of time.

The result of the 2nd Avenue project: a three-storey 2,500 sq. ft. house that borrows numerous benefits from suburban buildings, while housing a little independent studio in the basement. This home harmoniously connects different volumes that simply nestle themselves into the vicinity, all while assuming its contemporary lines.

Keen to invest themselves in their new adopted neighbourhood, Jean-Yves and his family wanted to be discreet and to settle in a respectful home design that would humbly insert itself into the landscape—a series of red-ochre plexes and single-family homes. The client also projected himself in decidedly open spaces that spilled onto the exterior with no compromise on intimacy.

With a notable difference between the street and lot levels on the back alley side, different vertical organization strategies were imagined to facilitate transitions and ensure maximum density. The creation of a comfortable basement space allowed for the integration of a small street-facing studio, and the concealment of a garage with an alleyway access. These underground spaces also animate the yard landscapes that playfully interfere with one another on all levels.

Juggling these specificities and the inherent liberty of a new construction, the Microclimat team came up with a tiered home design where the sliding volumes create different environments. Livable platforms and the paths they create offer multiple daily living experiences—both indoors and outdoors.

In the main apartment, the kitchen, dining room, and living room open generously onto one another, and onto the backyard via an abundant fenestration. These living spaces occupy the back portion of the ground floor, which is slightly raised by a few steps from the ground, and offer a direct link to a large terrace perched atop the garage. Surrounded by a low brick wall, this terrace offers itself as a promontory onto the back alley, as well as a protected space.

In fact, it is from this space at the back of the home that a clever arrangement of volumes reveals itself, with some volumes projecting forward and others pulling back to draw the eye and to a bleacher-style landscape. The modulation of this brick facade, articulating itself both in respect to the surrounding buildings and in response to the limited sunlight conditions, also becomes an intimacy strategy.

The massive low walls of the terrace, along with a light cantilever, support the discretion of activities in the kitchen and living room, while an important volumetric recoil maintains the intimate character of the rooms exposed to the large curtain wall. Seen from the yard, the opening created by this large glass wall plunges onto an English-style courtyard populated with ferns and other perennials that accompany light and nature into the downstairs office.

The more intimate spaces of the main apartment are situated on the second floor, including two big bedrooms, a shared bathroom, and a multifunctional room for all uses. This dual-aspect space, which will evolve with the family’s needs, also vertically connects spaces from all levels thanks to its generous double height and capping skylight. Enveloped in a warm palette of white oak and greige matte lacquer that deploys onto all levels, this space becomes a sort of platform where one can be carried away onto the city and through time.

The architectural duality of the front and back-facing of urban blocks is an integral part of the riches of Montreal’s central sectors; as much as a demultiplication of facades that enhances the city’s built heritage unfolds on the street, the back alleys abound with volumetric and material explorations of all eras.

The 2nd Avenue residence embraces this tradition: while its front facade aligns, dissimulates, and simplifies itself, the rear facade opens, projects, retracts, and cuts itself out. In one unified material endeavour, two very distinct interfaces emerge—one that establishes a coherent urban structure and protects our collective architectural memory, and another that lets life shine with contemporary considerations that celebrate our current ways to create. 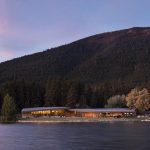