Federico Urfer Arquitecto designed this inspring private residence located in La Cuesta, La Calera, Córdoba, Argentina. Two rectangular prisms were used  meeting at an angle of 102° and corresponding to the directions of the lateral and back dividing axes. This allowed the architects to create a visual focal point and a node of division of uses, both private and social. Take a look at the complete story after the jump.

From the architects: The initial premise of this residential project was that it be located in the highest part of the lot, to make the most of the views towards the western mountains. With a positive slope of more than 35%, it was necessary to generate a ramp for vehicular access, this ramp crosses the front of the lot diagonally. For the implementation of the volumetry, having defined the levels on which to work, the strategy was to open the house to the north, to try to capture as much natural light as possible, and locate all the living and bedroom areas with this orientation, leaving the south facade for circulations and service areas, which could serve as protection against the colder orientation.

The volumes were designed with eaves and pergolas for protection to the north, which would allow natural lighting to be captured, but protecting the facades from excessive radiation in the summer. For the facades with more exposure to the west, two strategies were used: in the case of the bedrooms, most of that facade was closed with a double insulated wall, leaving only a small horizontal opening that allows views of the mountains from the bed, with a mechanized roller curtain, which allows opening or closing that view from that place. For the living/dining room, the entire facade was opened with window doors and fixed glass to integrate the distant views of the mountains and the closer ones from the terraces of the same lot, but a hanging screen was left from the roof that serves as a sunshade, protecting this facade in its most critical points.

This strategy was materialized with two rectangular prisms that meet at an angle of 102º, accompanying the directions that the lateral and back dividing axes have, which allowed them to generate a visual focus and a node of division of uses, private and social. . This division of uses is reinforced by the location of the garage and barbecue area at a lower level than the rest of the house.

The generation of terraces, unevenness and even the ramp, was resolved constructively, with exposed concrete retaining walls, which give the image of a base on which this house with two articulated volumes sits, with very light facades made, mainly by complete glass panes. 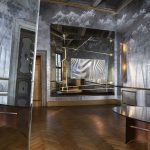 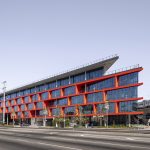