Paris-based practice ECDM designs a Social Housing building on in 45 rue Louis Blanc in the city of romance and love, Paris. The construction of the housing project at 45 rue Louis Blanc in the 10th Arrondissement of Paris is the result of a project launched in 1998 by the Paris city real-estate authority. The property developer was expected to take a piece of land measuring about 600 m² and replace an abandoned squat there which had been slotted for demolition with a low-cost building that adhered to the HQE (High Environmental Quality) standards still being determined at the time.

For the passer-by looking at it from the sidewalk and comparing it to the letter with the Haussmann style structure (a ground floor + 7 stories), 45 rue Louis Blanc stands out in two ways. First, by its façade with its scattered placement of windows and square oculi, covered with opalite panels. This glassy, whitish “over-façade” – with an opacity which makes it look frosted – is very soft, and contrasts with the surrounding mineral atmosphere.

The second unique feature of the building is its parking lot, which is located at street level and not, as is the Paris tradition, deep underground. Directly accessible from the street and sidewalk and separated from the outside by mesh fencing, the parking lot is located on the ground floor, a vacant area punctuated by the hypostyle pattern of the cement columns supporting the building, slanted to give the effect of fingers holding up the first level. The parking lot is a functional area rather than a dead-end, transforms into a garden that encloses the perspective. The fact that the garden is conceived to be a natural extension of the parking lot increases its usable surface area, in fact, notably for the building’s children who use it as one continuous play space. All this in the vein of “pleasance”, a word also fitting the colour scheme, alternating various lukewarm or “cool” colours (especially green) with areas that leave the raw concrete exposed.

The north façade – with its windows and “opalite” insulation panels, which faces the street and emphasizes verticality – is counterbalanced by the rear of the building that faces the courtyard and has southern exposure, and has been designed differently – with successively receding stories. From the seven stories in the front, we taper down to two in the back, a reduction in the number of floors which allows a fair and equal distribution of daylight among the 17 apartments in the building that range from 50 to 114 m² in surface area. The graded layout of the back of the building provides private terraces and balconies for several apartments, conveniences and other features that the traditional “tenement” can’t offer.

The building has the effect of a jewel of gracefulness set in a conventional, heavy architectural environment: a building of non-aggressive, ethereal appearance with an uncommon strength of presence implanted in a nondescript street. 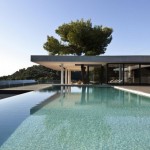 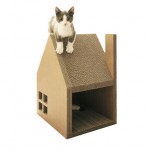