Jean Verville architecte has recently completed works on MB, a stunning rehabilitation of a cottage in Montréal, Canada. The idea articulates a crystallization fragmenting the volumetric entity by a physical and visual permeability, modifying perceptions of dimensioning by playing with positive and negative spaces. Take a look at the complete story after the jump.

From the architects: From fluid promenade to pragmatic functionality, MB offers a rehabilitation of a Montreal cottage orchestrating a sculptural experience with an architectural dimension. Interfering in the daily life of a couple of young professionals, a system, both simple and complex, multiplies geometric interweavings and visual breakthroughs to reveal a home in the image of its owners.

Focusing as much on compactness as on organizational interrelationships, the development of the architectural system requires its users to scrutinize their habits, and question the needs related to their daily life. In this process of collaborative creation, Mathieu and Benjamin adopt the playful approach of Studio Jean Verville architects with enthusiasm, humor, and sensitivity in order to specify the character identity of the project.

Playing with positive and negative spaces, the proposal articulates a crystallization fragmenting the volumetric entity by a physical and visual permeability, altering the perceptions of dimensioning. Opting for the subtraction of floor areas in favor of spatial qualities, volumes and interstices compose a domestic ecosystem of rows and vis-à-vis. Livened up by the constant variability of color shades, enlivened by the seasons and the natural light coming from the garden adjoining the living space, the MB project manifests the expression of these external parameters on its unifying monomateriality. Associated with its urban context and the flow of dynamic interactions generated by its internal conditions, including the movements of users and their way of living, a rhythmic versatility stands out in contrast to the geometric rigor of the assemblage.

Beyond the amalgamation of domestic functions, MB proposes an intervention multiplying interrelationships to enhance the movement through a parcours revealing its spatial polysemy. From archetype to abstraction, space is transformed. From an organizational matrix to a discovery game, MB presents a place participating in the active life of its neighborhood, while generating an enveloping family haunt. 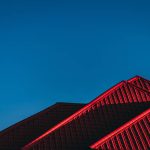 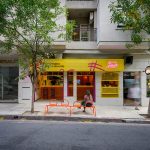