Project: Residential and Business Complex “Budva Centre”
Designed by AGM Architects
Project Team: Borislav Petrović, Ivan Rašković, Nikola Stojković, Nada Jelić, Luka Ostojić, Boris Petrović, Bojana Marković, Mina Kordić
Clients: Monterra Montenegro d.o.o. , MCG d.o.o.
Total Constructed Gross Area: 5860.84 m2
Location: Budva, Montenegro
Website: www.agm.rs
AGM Architects are sharing with us their impressive design for Budva Centre, comprised in a contemporary manner of both residential and business space. AGM's project is awarded 1st prize in an international competition, selected out of 18 other design proposal. In a refreshing way the architects have made a connection between past and present, see more of the project along with their description after the jump: The new complex complements the urban tissue of the very center of Budva city, by adding content and shape to improve the existing quality. Present surrounding is the framework for the creation of an architectural morphology which is to upgrade the input of the location. Thus the fusion of heritage and modernity is the answer to the needs of time and its value system.

Prominent position in the city matrix passes the appearence of the new structure to the level of urban landmark. Its size and shape associates on a group silhouette of nearby masts of the old port, merging with them into a single scene. The new complex becomes, therefore, the gravitational point on one of the most important vistas of the city center. The connection of past and present here is exposed by combining different spatial and formal principles, resulting in innovative relations. For example, main staircase, occupying the center of the vertical architectural structure, extends through the inner and outer space, like in local zoning schemes. On the other hand, the central motif of architectural design is a gap in the building volume, which brings to mind the silhouettes of coastal settlement and its narrow mediterranean streets. However, the view is not stopped on the facade of the neiborhoud, but vectored to the environment -the hills and the bay to the west and the open sea at the east and south.

The new building is ambiguous; at the same time, it is a part of the urban matrix, dependent on its inputs, and, at the same time, it represents a separate world, protected from external influences. The first aspect is related primarily to the manifestation of its spatial structure and the other to its spatial standard, within which users can be isolated from the environment if they wish.

The character of dwelling units connects both, systematic solution and desire for the unique response. Standardized schemes, intended for supposed unknown user requirements are personalized by enrichment of spatial forms and details.

That brings various characteristics and identity to the basically similar categories of accommodation units. Architectural design and building efficiency-comfort. The complex is formed as a two-piece body with base of curved edges and that is the central feature – subject of architectural concept, serving here as an item of energy efficiency and sustainability in a different ways, such as: Visual comfort. The gap between the two corps visually makes the shape look easier, allowing views through the core of the building and introducing natural light within the central circulation. Curvature of the façade screen contributes to the effectiveness of insolation of room apartments. The curve of the façade screen is also an item of energy savings due to the fact that its total area is smaller than in the case of rectangular one.

Geothermal energy is reheating the interior of the building. Soil testing will tell if the site has groundwater in which case it would be used.

Pools on the roof, also serve to energy saving. Water, as heat inert matter, is a kind of insulator and heat emitter. The water from that pool circulates system of pipes under the surface of the roof and back again into the pool. In this way, the cooling of the roof is done in the summer and heat rise in the fall and winter. Wind blow efficiency. Roundness footprint of a building contributes to the efficiency in relation to local winds. Air flow is reduced by the shape, thus the stress to the building cladding and structure is smaller. Seismic efficiency. The twin body design of the building, is generated by high seismic activity on the location. The new facility is, in the upper levels, divided into two sections and, by that, the console effect, in case of an earthquake, is significantly reduced. In this way, the vibration inertia of the whole facility is less and placed within secure framework. 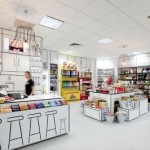 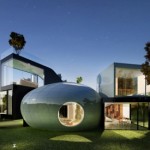