Brusnika Design in collaboration with JEMS and DROM have completed a series of towers in Novosibirsk, Russia. The 3 towers are based on a common morphotype, resulting in common visual links. Featuring a matching silhouette, proportions and uniform white stucco facade finish, they stand out against the neighbouring buildings. Take a look at the complete story after the jump.

From the architects: In 2014 the Ob riverside area in Novosibirsk was selected for redevelopment. According to the project, the existing industrial estate and fire station were to be replaced by several residential quarters. Brusnika is developing the European Riverfront, one of the plots along the Ob river.

The master plan of the quarter was designed by KCAP Architects & Planners. The European Riverfront is conceived as three clusters of blocks along the riverside and the inner street. The clusters are linked by public squares, each designed with a different character and dominated by a 25-storey landmark. Three towers Number 20, 24 and 28 are central elements to open public spaces in the housing estate composition, acting as navigation points for the pedestrian route along the river bank.

All three towers are based on a common morphotype, resulting in common visual links. Featuring matching silhouette proportions and uniform white stucco facade finish, they stand out against the neighbouring buildings. In terms of movement and flow, each house has a unique facade pattern with a regular grid for House Number 20, a horizontal and vertical one for Numbers 24 and 28 respectively.

An in-depth design of the buildings was assigned to several European architectural bureaus. The concept of House Number 20 was accomplished by Polish JEMS Architekci. The tower is embedded in a semi-closed block of four houses with alternating heights. Located in the middle of a waterfront housing estate, it stands out as a high-rise landmark. As the tower is positioned in a housing complex, its facade is plain with no summer premises or massing. The regular grid is maintained by the window pattern.

The architectural concept of the remaining two houses was designed by the Dutch DROM bureau, which embarked on the project when House Number 20 was already under construction. The architects suggested reinforcing the triad of the towers, inherent to the housing concept, by imparting each of them its unique character and its own shade of white. The existing lily white tower designed by JEMS, encircled by linear balconies, was enhanced by the milky white Number 24 and rose white Number 28, with pronounced vertical articulation of the facade.

To promote its signature look and add character to House Number 24 design, the architects decided to wrap it in balustrades perimeter-wise, creating a continuous line of balconies. Overlooking the east and south, the balconies of the the 3d to 10th floor gain depth and boast the view of the nearby isles and the bridge. The wall joins the balustrade in cavetto with soft light-and-shade, resulting in a visibly subtler look.

Number 28 is the third tower on the front line. Located in the pedestrian precinct cusp, it overlooks the green square with a parking lot and retail shops. The facade plates are shifted in space due to vertical protrusions and recessions on the southern side of the building facing the river and the northern side overlooking the main road. The minimalist facade design allows of bigger apartments size facing the river and the city. The southern facade gains additional depth via open recessed balconies and large windows. The upper storeys have expanded windows, which improves the view and visually lightens the facade.

Number 20 overlooks the public space between the neighbouring buildings and a kindergarten. The other towers are similarly linked to public spaces. Number 24 opens into the waterfront, with a landscaped park next to the river, while Number 28 has its local space with a sturgeon-shaped playground and recreational areas for adults. 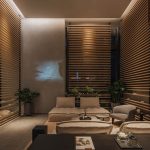 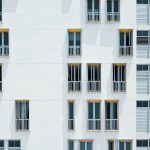