An architectural practice bFArchitecture share with us their splendid design for the Brasilia Athletics Stadium located in Brasilia, Brazil. The features design by bFArchitecture won the second prize on ArchTriumph Architecture competition in 2013. Discover more of this rewarded project after the jump: The New Athletic Stadium of Brasilia is designed based on rethinking functionality of sports in today’s social communication.

Composition of the Stadium is a contradiction itself, classical ancient typology of a stadium has fleeted to a new approach. It gains a rectangular form and it is based in straight lines and sharp angles, although the form itself is monumental with applied combination of materials, it gains lightness and elegance that would compare to the iconic curved structures of Oscar Niemeyer. Therefore the Stadium works as a sculptural landmark. Defining part of the new approach is integration and communication, not only inside the Stadium, but also in a dialog between it and its surroundings and society. Through this concept Stadium gains a wide entrance part, it becomes easily accessible to everyone and also eases the evacuation process in unlikely case of need for it.

The spatial planning of the stadium allows visitors to be in the centre of the action at all times. Breaking imaginative borders between the sportsman and their supporters creates a new typology of the Stadiums inner structure. Terraces, seating areas and standing platforms are implemented next to the sports field and the running circuit. Playing with levels, visual contact between the closed area and the field of stadium has been established, allowing the unique feeling of presence even while shopping or getting snacks in the foyer and allowing society to feel the action and to participate. Therefore visitors can choose a place next to the sports of their preference, while the most popular disciplines stays visual from any point in the Stadium. To add to the stadium some unique feature a new track has been introduced, it diverse in the degree of difficulty depending on the part looked at, therefore it can be challenging in local records, similar to F1 circuits, making cycling, rollerblading or even carting tournaments possible.

For the public ways and also for the support of the seating rows the reinforced concrete structure is being used. The openings between structure elements are filled with the ETFE-foil air panels. Not only it provides the sunscreen to spectators, but also gives an appearance of lightness to the structure.

Although the stadium has been created as a contradiction it respects classical sports and also the standards of the field requirements. The separation between levels allows also smaller non-sport events to take place in the Stadium, therefore increasing its economical and social activity and diversity of use. 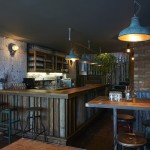 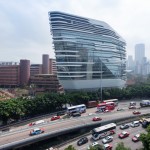