bFArchitecture practice share with us their Purchased Prize winning design of the Fairy Tales House in Odense, Denmark. The House of Fairy tales is composed of a museum part which is underground and 10 Follies Houses disperse on the Lotze’s Garden. The House of Fairy tales for the Hans Christian Andersen Museum is designed based on transmitting a story to the visitors and its public.

The House of Fairy tales is composed of a museum part which is underground and 10 Follies Houses disperse on the Lotze’s Garden.

The Follies Houses get their origin from Hans Christian Andersen birthplace and fan out through Lotze’s Garden to invade the city starting on the Thomas B Thriges Gade towards the world like missionaries. They brings his stories to the peoples. Originate the Follies Houses were transformed and detached from the typical neighbor houses on the urban grid. They became living and they moves freely on the Lotze’s Garden like the public. Together with the visitors of the Garden they form the public.

Each Folly House has a story to tell. Their facade are all in white high gloss painted aluminum with cutting pattern from the collection of the papercut’s works. Inside those installations the natural light will give an enchanted atmosphere. During daytime the natural light will project Andersen’s work inside, while at night the inner artificial light will shine his work to the world. The Hans Christian Andersen Museum is build underground leaving the Lotze’s Garden untouched but adding a level to the Garden. The wide access from the Garden to the Museum will attract visitors, offering them curiosity, experience, reflection and imagination to discover the origin of that fairy world.

The laying out of the Lotze’s Garden will be part visible from sky view ceilings in the Museum and patio’s connecting the outdoors with the indoors. A basins of water at Lotze’s Garden level will reflects magical light into the spaces of the Museum below. The Follies Houses may be used for different allocations such as a Public Library with adjacent terraces on the Lotze’s garden, access to the underground parking, Exposition Hall, etc. Although Follies Houses has been created as a contrast to the surrounded buildings to preserve their origins, it respects the urban typology. The Lotze’s Garden is playing with levels allowing society to use the Garden for different event’s as concerts, lectures, movies, etc.. 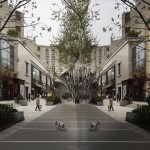 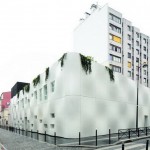