UMA Interior Design have recently completed their lates project in Shanghai, China – a minimalist and futuristic sales office. Take a look at the complete story after the jump.

The Pythagoras school of ancient Greece believed that the world is made up of digital logic—all things are numbered, and number is the origin of all things. Only with numbers can there be geometrical points, and only with points can there be lines and three-dimensionality, and three-dimensionality generates fire, air, water, and earth, and everything is born from this.

In the ups and downs of the digital wave, UMA Design has joined hands with everyone, Maison, so that the never-ending algorithm and order, like the coding sequence of DNA, are presented in a more visual way in the space. The viewer is invited to set off on this journey, step into the future, and understand the nature of life and all things.

Space is a geometric point, line and surface. Stepping into the space, the designer used a set of suspension devices that resembled a Mobius belt to play a small space game with the viewer. Using this as a visual foundation, the line and surface are not only the material that declares the space, but also the hint that the digital logic and the three-dimensional form will become the clues of the space.

The designer was attracted by the semi-permeability of the horizontal strip structure, and used the skylight projected in to neutralize the heavy technological sense of the ceiling installation structure. In the light of different angles, the reflection and transmission of light make the installation diffuse a hazy and mysterious future.

Kandinsky described: “Each independent thread is an active inner tension.”

Breaking through the neat and static linear display, through the calculation trajectory of digital logic, the dynamic formation makes the spatial level fluctuate. The dots, lines and planes are transformed into something that transcends the real world. The huge tree of life stretches out its vibrant branches and leaves, constituting a meticulously unknown source of life.

Kandinsky mentioned in his book “Points, Lines, flat”: “Relying on the spiritual investigation of the individual art, this element analysis is a bridge to the inner rhythm of the work.” Lines and surfaces are solid, but also It is freedom. The connection between the line and the surface constructs the interesting and artistic tension of the space, and becomes a bridge connecting the upper and lower spaces.

The space is flowed with lines, and the jumping sphere breaks the solidified dimension, visually dilutes the commercial sense of the space, reflects the abundant spiritual existence of the space, adds the flowing dimension of time to the concise space, and conveys the joy and innocence of the deep memory.

All deep spatial experience cannot be separated from human emotions, it maintains the perception of the external world. The dots and lines converge into light and shadow, which not only has a clear expression and a sense of narration, but also generates a soft atmosphere. Light and space restrict, derive, and refer to each other. Here, the community of the scene generates the perception of light.

Entering the bar area with a sense of quality, the green that represents life injects new vitality into the design. The light flows in the tension of the lines, illuminating itself and tapping the space at the same time, thinking about the changes in emotions.

The infinite evolution of lines, breakthrough structures, and romantic and philosophical installations together construct a space that belongs to the future. UMA Design presents the metaphor of the future of mankind in reality, and creates the possibility for future life with the language of design. 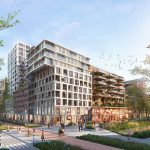