Project: The Creature Code
Designed by Visiondivision
Location: Tokyo, Japan
Website: www.visiondivision.com
The talented Visiondivision team was invited by the famed webpage Designboom and Japan Design Association and to create a piece of architecture as a tribute to the eccentric 18th century painter Ito Jakuchu. Discover more of their design after the jump: The Creature Code. Visiondivision was invited by the Japan Design Association and Designboom to produce a piece of architecture as a tribute to the eccentric 18th century painter Ito Jakuchu to be exhibited at the Tokyo Designers Week.

In the beginning, the world was untainted nature; creatures could find water in the rivers and the lakes and find shelter in the woods, the grass and within the earth itself. With the evolution and progress of mankind however, nature has been shifted more to suit the needs of humans and more and more of the surface of the planet has become artificial with vast areas of croplands and the rise and prosperity of towns, cities and metropolises. The animals have been pushed away to smaller parcels of lands and whole habitats have been changed with the speed of human development. Some animals have adapted to these new artificial environments but there are seldom any efforts from the humans to make it easier for them to do so, we don’t want them in our cities unless they are well-behaved pets.

Ito Jakuchu understood the value of animals and wanted to combine the worlds of animals and man into something greater. In his spirit, we have done a series of projects to increase the awareness of that we are not the only species on this earth as well as in the cities that we have produced. Common building materials could be slightly adjusted to still keep its intended function but that now also can be used better by the critters in the city. Hopefully this could be a start to a design strategy for the urban animals.

Each project uses an advantage that the city brings and that could benefit the animal; Water, Food, Shelter, Heat, Production, Heat and Lifestyle We realized one of these proposals in Tokyo which takes use of the water in the city. The idea is that where we before just saw a gutter, we will now try to see small rivers, so instead of directing water from our roofs directly underground in a hurry, we’re proposing it to take detours that will benefit the city animals better which sometimes have trouble to find water. To show a very literal example of this, we have made a gutter module that is a fish tank that fits any standard Japanese gutter.

We went to the Tokyo Glass Art Institute where we gave the instructions for the creation of the fish tank and which we later on attached to a drainage pipe at a residential house in the outskirts of Tokyo.

Shelter. When we build our houses, we often make them impenetrable and hermetic to keep weather and animals away. It is poignant to see all this building mass and facades that doesn’t givie anything back to nature.

With simple modifications we could for example make a new brick into a bird house and another brick as a bird bath and so on.

Production. We have a superior technology and production capacity that we are alone of having on this planet. The combination with the size of a human compared to insects for example, means that we could without much of an effort give them entire cities in a matter of no time. If we take the Japanese rhino beetle for example, that live most of its life under ground, is having a hard time to find places to exist due to the immense foot print that our cities are making, and where there are not houses, there is impenetrable asphalt and concrete that makes a coating over the earth.

We could easily modify drainage sheets that are normally dug down around houses into massive underground housing complex for the insects that would still function as we want it to but benefit them greatly.

Food/Waste. The waste of food that we produce each year is discomforting, if each household had a special home appliance under the sink where leftovers can be put and that also could be visited by critters like rats, cockroaches and worms, a part of this waste could come in use. The small animals are also important for larger urban animals that prey on these for their survival.

Heat. Many animals hibernate in climates with cold winters and even if they don’t sleep through winter they anyway tend to be less active and slumber a lot and seek warm places. The heat that we produce could come in handy for some of these animals and can easily be better shared to our fellow critters. We could also give away some indoor space that we don’t use, like the area under a sofa or a bed for example.

This space could with a small enclosure be made into an animal winter habitat which is reached from the outside with a cover. These can be already custom made with an enclosed space that is docked in to the wall opening, or be a small container that can be inserted in the same fashion.

Lifestyle. There are many intelligent animals that don’t just think of life as surviving and reproducing, the snow monkeys in Japan for example that both take pleasure in bathing and sunbathing. We replace some of the plain metal sheets on the roof with curved sheets that make excellent sun chairs to stretch out on, just next to a curved steel section that makes up a basin of water that could be heated during the winter. The chimney is also refined into a habitat for the monkeys so they can take part of the heat.

Monkeys can also use tools, so a set up with electrical appliances, connected with a sun cell unit, that can benefit the monkeys enjoyment in life, for example a blender to mix their fruits, a refrigerator for cold drinks, a fan for hot summer days and so on. 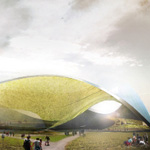