Historically, Metalsa began as a family-owned company, founded by Guillermo Zambrano Gutierrez in November 1956, previously named Manufacturas Metalicas Monterrey.  The company later entered the automotive industry through a partnership with American firm A. O. Smith and began manufacturing chassis frames for heavy trucks and pickups in the late 60’s.   The official name of Metalsa was adopted in the late 70’s and operations started in Apodaca.  Metalsa’s successes allowed them to acquire the commercial vehicles business from Tower Automotive expanding to Virginia, and later building facilities in China, Japan and India.  Today the company boasts several major automotive corporations as their clients, including Ford and Toyota. Site: A 100,000 square foot vacant parcel located within a new Research and Technology Innovation Park developed by the Mexican government.  The site is also adjacent to the Monterrey, Mexico airport and adjoins a natural habitat area. Solution: Industrial buildings are rarely a place that anyone is happy to visit or work.  They are typically a direct, and often nefarious programmatic response to the function inside with little consideration for the occupants needs. The approach to this project was to preserve the integrity of a high bay industrial facility and program, while providing a model environment for the users and visitors. A saw-toothed roof draws from the geometry of old factories and the surrounding Monterrey Mountains.  The angled elements of the roof provide abundant natural daylight to the spaces below at the building’s northernmost elevations.  By modulating space and light thru a fractured roof geometry, the building is able to maintain a rational plan to meet the rigorous requirements of the program, while providing a strong connection to the landscape both visually and metaphorically. The second major feature of the building is the perforated metal skin that clads the entire façade. Manufactured by the client in their auto manufacturing facility nearby, the custom aluminum skin is both perforated and etched. It incorporates interplay of solid and void, orchestrating areas of both light and shadow, while limiting views into the research areas, necessary to protect proprietary trade secrets.  Thus, the industrial program has been transformed from a black box environment to a light filled space with a strong visual connection to the outside.

Each of these strategies and materials, exploit the potential for performance and sensibility while achieving a rich and interesting sensory and aesthetic experience. Programmatically, the building is divided into two volumes – warehouse/labs and offices functions.  The upper story of the offices cantilever over the lower story to the west and is clad in a highly perforated metal skin and is the main entry facade. The lower story is mainly glazed and open to reveal portions of the research laboratory, machine room and other industrial functions not requiring visually security.  From the exterior, the warehouse appears to float lightly over the mechanical and intellectual heart of the program, reversing the notion that an industrial building should be solid and protected.  Rather, the building seems very open and is intended to feel vulnerable revealing parts of its inner program to public view. The main entry of the building is located at the northwest corner under the cantilevered volume.  It is flanked by a sunken garden to the north, which is overlooked by the surrounding offices. The garden is a natural bioswale that connects to the adjacent water reclamation wetland for the entire PITT campus.  A large industrial overhead door located off the entry in the main public space opens to the garden outside. 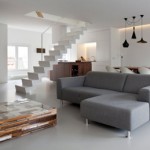 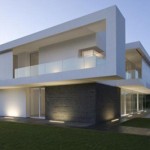