Chevalier Morales Architectes, in collaboration with DMA Architectes, has won the Architecture Competition for the Renovation and Expansion of the Pierrefonds Public Library.The project called for a complete renovation of the existing building to achieve LEED Gold certification and a 2,316 square meter extension that would include new document management technologies. The project has been selected by a jury presided by Mr. Jacques Plante, Architect and Associate Professor at Université Laval, and composed of Mrs. Phyllis Lambert, Architect and Founding Director and Chair of the Board of Trustees of the Canadian Centre for Architecture, Mr. Oscar Ramirez, Architect Associate at Cardin Ramirez, Mr. Michel Beaudry, Architect at Beaudry Architecte and member of the Pierrefonds- Roxboro Borough's Architecture Committee, Mr. Dominique Jacob, Director of the Pierrefonds-Roxboro Culture, Sports, Leisure and Social Development Department, and Dr. Guylaine Beaudry, Acting Director of the libraries of Concordia University. CREATING AN INFORMATION EXCHANGE BUILDING
«The planning of the ensemble is inspired by the economic pragmatism of shopping malls, train stations and airports, while avoiding to replicate their disadvantages»
While looking through old Pierrefonds master plans, we came across a graphic representation of the main planning criteria for green spaces in the district. The drawing showed an idealized park, in a non-specific site, located at the junction of two linear avenues and closed off by a curved street. The park was divided into various areas, depending on age groups and types of activities, very similar in fact to common library planning. An in-depth study of this document, paired with the manipulation and reorganization of the various areas, especially the green spaces, became one of the foundations of the project. The two projected interior gardens ‘emerged’ as a result of these manipulations. Created following an extraction process, the gardens allow natural light as well as part of the forest to reach the heart of the existing building. The gardens are also referential poles for users and employees of the library. Typical of suburban environments, the shopping mall typology was also deeply investigated. Shapeless buildings, obedient to functional and economical requirements, shopping malls have one or many focal points. Inside these malls, temporary or seasonal activities such as Christmas and Easter celebrations commonly take place. Another main characteristic of the shopping mall is its circulation network, which leads to multiple entryways and which sometimes forces the customer into specific paths. Thus, stairways typically located in central atriums of shopping malls are often voluntarily reversed, as a way of extending the visitor’s stay. This typology is particularly interesting for the planning of a library. Its numerous spatial qualities are essential components of what we call ‘the 3rd space’. Users circulating freely, flexibility in spatial organization, multiple movements and experiences are just a few of the known advantages of shopping malls. The project’s scheme, with its ‘wings’ merging into a meeting space, a crossing network of stairways, a bleacher, openings in the floor allowing visual connection, multiple skylights as well as a civic space, is directly inspired by the shopping mall typology. The building’s perimeter, usually filled with parking lots and opaque walls is here replaced by green spaces and transparency. On the formal level, the project is obedient to similar constraints and adjusts itself according to the site’s main elements. Instead of being purely functional and economic, the building’s shape is either drawn to manifest its urban presence on boulevard de Pierrefonds, pulled toward the northwest to get closer to the ‘Boisé du Millénaire’, or urged to retract itself in order to reveal and highlight existing greenery islands on the site. Ultimately, the project can be defined as a combination of an idealized park with a shopping mall, inspired by the organization and spatial structures of these two typical suburban structures. 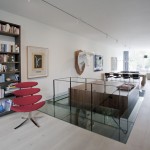 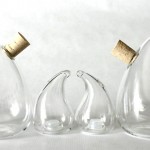