The former Kralings Museum at the Hoflaan has been transformed starting in 2010 into a luxury apartment building named Casa K by the PEÑA ‘s architects. Transformation of museum to house
The former Kralings Museum at the Hoflaan has been transformed starting in 2010 into a luxury apartment building. The building contains three apartments with a communal entrance and an elevator that offers access to the upper floors. The Casa K project involves the street level apartment which consists of two layers: a ground floor of 195 m2 and a basement of 90 m2. The apartment has a garden of over 600 m2. A new design for the project Casa K has been developed for the two levels using and adapting the existing installation structure in the building. The design challenge was to turn the windowless basement and the ground floor into one unified space while still adhering to the city’s preservation requirements pertaining to the Hoflaan area. In addition, the architect had to design the interior including all the closets in the office, bedroom and storage room. The kitchen is fully customized based upon collaboration between the architect and the client. A lighting plan has been designed, and materials and colours for the whole house have been chosen. The key element of the design is a walnut cube which begins on the ground floor and protrudes through the first floor living room where the cube forms a raised platform. In the living room, the cube is surrounded by walkable glass. The cube determines by its size and position the division of the space and therefore provides a clear distinction between the front and rear parts of the living room. Walnut is employed for the cube as well as for the cooking island and the office. The combination of walnut with the colour black is an integral element in the apartment. Thus, the handrail is made out of black painted steel, like the kitchen door. In the kitchen and the hallway, black fittings are used. The closets in the house are of different colours. In the kitchen, the cabinets are finished in an aluminium colour. The bookshelves in the reading area are in dark grey stained wood. 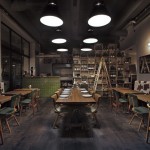 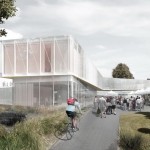