The Central Deck and Arena project in Tampere, Finland, is a unique urban scale architectural development on top of the existing railway tracks in the very heart of the city. The project will stitch the East and West parts of Tampere back together again and culminates in a sequence of various open public spaces, lined with a commercial plinth and offering room for vibrant city life activities and events.

The deck will be developed in 5 building phases, with a total of approx. 60.000 m2 of mixed-use program and 38.000 m2 of arena space, including peripheral functions such as practice field and wellness center.

Phase 1 of the program consists of the multi-purpose Ice Hockey arena with a capacity of 11.000 visitors and one fifth of the mixed use component. With its shopping arcade, bars and restaurant at deck level, the arena redefines its pivotal function as a hub for diverse urban activities. The development is directly linked to the adjacent train station and close to the main bus station to encourage the use of public transportation during events.

The Arena will be the home for Tampere’s 2 Major League Ice Hockey teams Ilves and Tappara and is scheduled to be completed in 2013 when it will host the Ice Hockey World Cup of 2013. Phase 2, 3 and 4 will contain a mixed-use of commercial program, offices and housing that will offer mixed unit types to answer various market segments. The composition of the ascending residential towers will be completed with the hotel as the last phase in the development. Its presence will function as a beacon within the city and will redefine Tampere’s 21st century skyline. 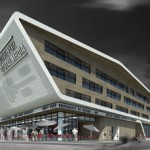 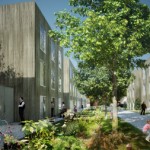