Located in the mountainous landscape of Gyeongju, South Korea, the Korea Hydro Nuclear Power Headquarters avoids becoming an obtrusive landmark tower in order to respect the geographic and historic aspects of the site.

A simple, clean design that represents the rich culture of Gyeongju also becomes a symbol of KHNP as the creator of the world’s cleanest and safest means of energy production.  Wrapped in a shell of Corten Steel, the headquarter building is a subtle architecture that blends with and emerges from the adjacent mountainside.

Derived from the orbital lines of electrons, the design captures the nature of hydro nuclear power with elliptical and radiating forms and lines.  The primary building mass gradually slopes upward as if growing from the adjacent elevated landscape, creating a form large enough for the required program that does not disturb the nature or the rural context.

The façade takes on contrasting inner and outer designs.  On the inner façade which faces south, a modular system of prefabricated 3 dimensional fins allows for optimal sunlight within the office spaces while preventing excessive direct solar radiation and heat gain.  On the outer façade which primarily faces the north, a panelized elliptical surface of perforated oxidized steel articulates a continuous curvilinear wall.  The steel is articulated with a pattern created from the image on the Emille Bell, a national treasure and well-known local cultural icon.  The building creates a relationship between the history of Gyeonju and the advanced technologies of the hydro nuclear power. 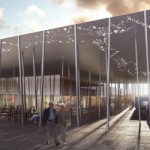 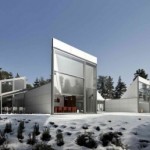